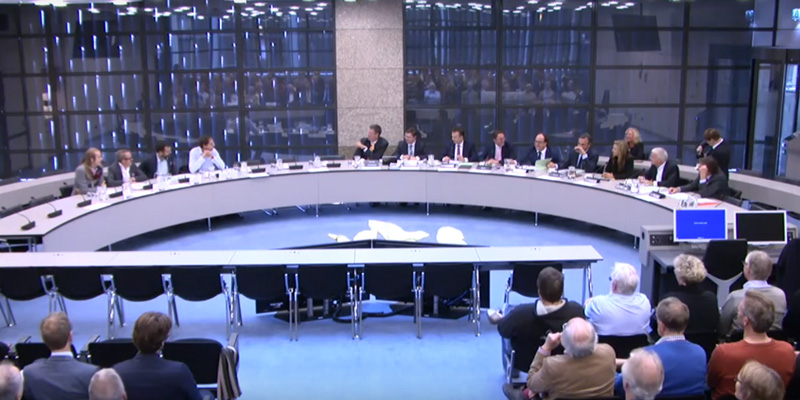 The Dutch parliament hosted a hearing with the instigators of a successful citizens’ initiative on monetary reform. A preliminary step before a debate in plenary chamber.

This article was originally published on Positive Money’s blog. Thanks to Sylvie Jacobs for her contribution to this report.

On January 2015, our Dutch member Ons Geld (Our Money) launched an initiative on the creation of money. After having collected more than 100,000 signatures, an enormous success in such a short period of time, the citizens’ initiative was submitted to the chairman of the committee for citizens’ initiatives in the Dutch Parliament, in the presence of five members of parliament.

As a preliminary step before a debate in plenary, a hearing on Money Creation took place in Parliament on October 14th with the Finance Committee. Four of the founders of Ons Geld spoke to an unusually large audience and received heartwarming applause. It turned into a wide-ranging discussion, in which a range of views on the system were expressed.

Representatives from the Amsterdam-based multinational bank ING and the DNB (the Dutch ‘independent’ central bank) and the AFM (Authority for the Financial Markets) were also present. AFM gave some support with regards to the emergence of cryptocurrencies. The representatives from ING and DNB mostly kept silent.

The hearing started with an introduction speech by the organisers of the citizens’ initiative, who had the opportunity to summarize their proposal. Ons Geld was represented by Edgar Wortmann and Van Houts who brilliantly made the points that a banking licence in effect “grants a privilege to create money” and that the initiative aims at establishing a “clear separation between money and credit.” “Money is something that the government should create and make available. Credit belongs to the free market” said Wortmann. Finally Luuk de Waal Malefijt stressed three major hurdles to overcome in the debate about money creation, namely illiteracy, deficiencies in the teaching of economics and conflicts of interest.

OnsGeld received thunderous applause in response to their speeches, causing the chairman to request  people to stay silent. This was the first time ever that people in the Lower House had applauded speakers. On YouTube the ovations have been muted.

The floor was then given to 8 members of the Dutch Parliament from all different political groups who had the opportunity to put questions to the citizens. Answering a question about the process to achieve monetary reform, Martijn Jeroen van der Linden outlined five different steps:

The third section of the hearing was dedicated to an exchange of views between the initiative and ‘concerned parties’: The Amsterdam-based multinational bank ING, DNB (the Dutch central bank) and the AFM (Authority for the Financial Markets).

First Mr Polmanand (AFM) stressed all the efforts deployed by the Dutch Financial Authority to reduce abuses and risks in the credit sector, but failed to make any relevant point regarding the sovereign money proposal, although he agreed withOnsGeld on the need to experiment with digital cash before the free market does so on its own.

The next speaker was Dirk Bezemer, professor at the University of Groningen who described sovereign money as “a solution of the 1930s for problems of the Netherlands in 2015″ arguing that the current system could be monitored and run in a better way.

Klaas van Egmond, professor of environmental science and sustainability at the University of Utrecht, then outlined the main conclusions from the then IMF economist Michael Kumhof’s paper “The Chicago Plan Revisited”. Then Van Egmond made a very good point when saying that a split monetary system in which all new money was created ex nihilo by the government and banks and other lenders were simply moneylenders that lent existing money, would simplify the job for Financial Authorities, by making the need for monitoring & surveillance almost obsolete.

Next, ING economist Teunis Brosens made three criticisms of the initiative.The first (and confused) one was that money creation is a byproduct of credit, and therefore the problem is credit, “because that’s the source of good and evil”. Second, many reforms on credit are underway, so we should give them a chance before criticising them. And third, concentrating money creation powers in a public institution will attract a lot of public pressure onto it, jeopardising its independence.

Finally, Jan Marc Berk from the Dutch central bank made a rather defensive and diverting speech arguing that banks also have their societal role to play and if they properly fulfil this role, then they are in a position to cushion the shocks over the economic cycles, and emphasising the fact that money creation only happened as a response to a demand for credit. Finally, the central banker reminded the audience of the Netherlands’ reliance on foreign trade and the European Union as a possible hurdle preventing the Netherlands from pursuing monetary reform.

Then followed a discussion between all participants where members of parliament could ask a new round of questions. One crucial questions was about the nature of money: is money necessarily debt? This question sparked an interesting debate between the promoters of the initiative and Prof. Bezemer.

Here’s the hearing with English subtitles:

OnsGeld can be seen in the first block (from the 3rd to 43 minutes). From the 50th minute it continues with block II with banking officials, regulators and professors. Fortunately there was also support in the 2nd block, besides criticism and misunderstanding. Support came from Klaas van Egmond (Utrecht University, employee of the Sustainable Finance Lab and crown member SER/the Dutch Social and Economic Council).

Many blogs and articles appeared about the citizens’ initiative but many of them contain misinformation or unfounded criticisms. There has been some dialogue with the Dutch ‘Financial Times’ (Financieel Dagblad, FD) about their refusal to put the views of ‘OnsGeld’ in the newspaper. They argued that they find the positions of‘OnsGeld’ nonsensical. FD rejects these positions “by force” – “That there are different monetary systems possible with different advantages and disadvantages is obvious. But giving a monopoly on money creation to the government cannot count on our sympathy.”

The refusal of FD to report on OnsGeld is in stark contrast with the appreciation expressed by MPs for the citizens’ initiative, and the widespread recognition of the importance of the public debate about our monetary and credit system.

“We are making progress but have to compete against parties with deep pockets and their own printing press.” – Founders, OnsGeld

Many attendees called this hearing “historic”. OnsGeld hopes that this may be true. The basic instrument of power in society, money, should be brought under the care of democracy. And if that were to happen then this event will be historical. As Van der Linden said during the hearing, “Never before has the power to create money been subject to public social responsibility and subservient to the public good. The monetary system has hitherto always been a plaything of princes, kings or bankers, who used it to their advantage.” It would be historic if the creation of money in the further course of history would serve us all.