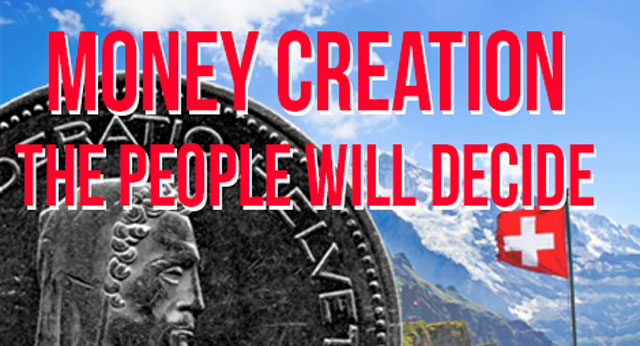 The Swiss population will be the first in the world to vote on their banking and monetary system, thanks to the tireless efforts of a pro-Sovereign Money campaign.

This article was initially published on Positive Money’s blog.

The “Vollgeld Initiative” (Sovereign Money Initiative) has successfully managed to collect 100,000 signatures –  the number required to trigger a nationwide referendum on the issue.

The campaign has been coordinated by Modernizing Money (MoMo) and launched on June 3rd 2015. It involved over 100 activists collecting signatures in the street for the past year and a half.

“It is amazing that we were able to collect so many signatures in favour of Sovereign Money in Switzerland, we are very happy! The success of the Swiss campaign is a major milestone for the growing international movement for monetary reform”, said Raffael Wüthrich, member of the campaigning team.

Under the Swiss Federal Constitution, if a petition gathers at least 100,000 signatures within 18 months, a referendum is held on the issue a few years later.

The Vollgeld Initiative proposal is very similar to the one we are advocating at Positive Money UK. It aims at granting the Swiss National bank the exclusive power to create new money.

“In a nutshell, the proposal extends the Swiss Federation’s existing exclusive right to create coins and notes, to also include deposits. With the full power of new money creation exclusively in the hands of the Swiss National Bank, the commercial banks would no longer have the power to create money through lending. The Swiss National Bank’s primary role becomes the management of the money supply relative to the productive economy, while the decision concerning how new money is introduced debt free into the economy would reside with the government”, reads the official website of the initiative.

In Switzerland, referendums are usually organised 3 to 5 years after a popular initiative succeeds. The proposals first have to be debated by the Federal government and Parliament. In case the Parliament decides to adopt a proposal into law immediately, the organisers of the initiative have the right to renounce the referendum, hence speeding up the implementation of the proposal. However, this is very rare case, as most initiatives are ultimately submitted to a nationwide referendum.

The success of the Swiss campaign is a major milestone for the growing international movement for monetary reform, which has already catched the attention of the international media. However a lot of work remains to be done, says Raffael Wüthrich:

“Our work doesn’t stop here. On the contrary, now, we have to convince the swiss population of the importance of Vollgeld. We expect this will be an even greater challenge. As we don’t have a big sponsor so we have to be creative in the next years to reach the swiss people with our messages. Please donate to our cause and help spread message to help us make the most of this incredible opportunity. Thank you so much for your support!”