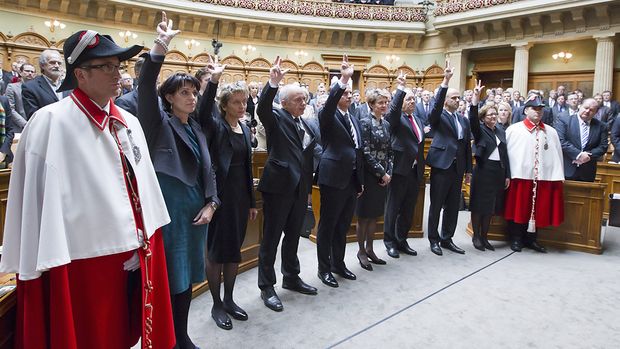 The Federal Government of Switzerland has published a negative opinion on the citizens’ initiative proposing to prohibit money creation by private banks.

Last November it was announced that the Swiss campaign for monetary reform Modernising Money (MoMo) had collected 111,819 signatures to support a referendum on removing the ability of banks to create money.

The Swiss Federal Council – the 7 most senior ministers at the head of the Swiss government – gets to respond to every referendum proposal, and state their position. Unsurprisingly, they have “rejected” this proposal, which means the referendum will go ahead, but the government will advise citizens to vote against it. The Federal Council did not issue a counter-proposal, in effect stating that they were happy with the current state of affairs and that no changes to the monetary system are needed.

The full statement from the Federal Council is copied below (translated from the original in French). Their arguments against the proposals are the typical knee-jerk reactions that are usually given by economists who have given the proposals little thought. The Swiss campaign’s economists are writing a full response to the Federal Council’s points. As soon as they release that response, we’ll post an English version here.

The Federal Council rejects the “Sovereign Money” initiative without counter-proposal

Bern, 02.24.2016 – At its meeting today, the Federal Council has expressed its opposition to the popular initiative “For a currency safe from crises: currency issue only by the National Bank” (the initiative called “Sovereign Money”). It justified this rejection by invoking mainly unforeseeable risks that the overhaul of the monetary system applied by the authors of the initiative would lead to the financial sector and, consequently, for the whole economy.The Federal Council will not present a counter-proposal.

The popular initiative “For a safe currency crisis: monetary transmission only by the National Bank” (the “Sovereign Money” initiative) requires the development of a new framework for Swiss monetary system. It proposes that a new Article 99 of the Constitution gives the Swiss National Bank (SNB) monopoly on the creation of bank money. Thus, commercial banks could no longer grant loans funded as now by sight deposits (current accounts). The initiative also plans to distribute directly the newly created public institutions or citizens money.

Like the authors of the initiative, the Federal Council recognizes the importance of a stable financial center. It believes, however, that contrary to its promises, the initiative would not ensure a better protection of deposits in the event of financial difficulties of banks, because it does not prevent banks from liquidity and solvency issues. This is why the Federal Council wishes rather pursue its strategy to strengthen the stability of the financial sector through appropriate regulation. Significant progress has already been made ​​in this area over recent years, with the adaptation of the requirements to Basel III standards and the requirements for systemically important financial institutions ( “too big to fail”).

The money put into circulation by the SNB today is backed by foreign currency and gold reserves in the SNB’s balance sheet. If, as the demand initiative, this money is put into circulation by transfer to governments or citizens, this could undermine confidence in the value of this payment. The capacity for action of the SNB for monetary policy could well decrease, and it would be difficult to guarantee price stability.

An overhaul of the financial and monetary system generally involve uncertainties and risks for the Swiss economy . No modern economy has ever set up a system of “full reserve” or “sovereign money”. If Switzerland was the only change system, this would endanger the international position of its financial center. The implementation of the new system would cause legal uncertainty and competitive disadvantages for financial institutions operating in Switzerland. And a weakening of the financial sector would entail in turn risks to the rest of the Swiss economy, especially because the initiative could have the effect of restricting the granting of credit.

For these reasons, the Federal Council rejects the initiative. This [proposal] is in contradiction with its strategy to ensure financial stability, it also relinquishes its right to push a direct or indirect counter-proposal. The Federal Department of Finance was commissioned to write by 1 December 2016 a message to the Parliament.