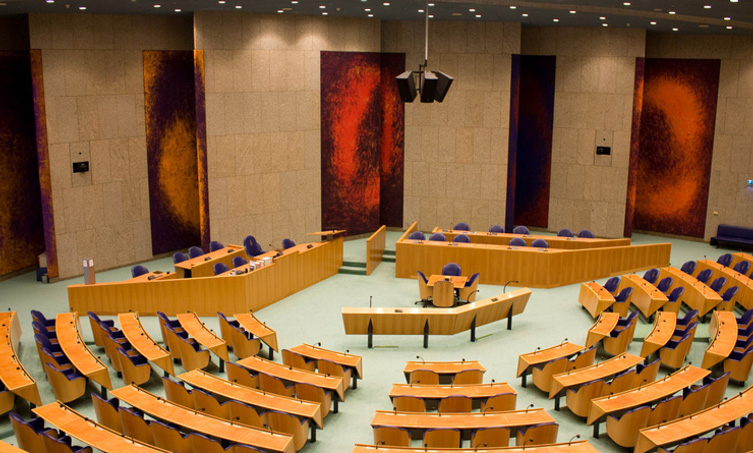 On March 16th, the Dutch Parliament’s plenary assembly discussed the possibility of transitioning towards a sovereign monetary system and adopted two motions committing the government to carry out further research.

This article was originally published on Positive Money’s blog.

About one year ago, more than 100,000 Dutch people signed a citizens’ initiative to make state issued digital cash into the political agenda of the Dutch Parliament. This success was the result of a fruitful cooperation between our sister organisation Ons Geld (translated ‘Our Money’) and a theatre group called ‘The Seducers (De Verleiders) which showed a play called “Taken by the bank“ which explains money creation.

In the Netherlands, citizen’s initiatives that gather at least 40,000 valid signatures must be put on the agenda of the Parliament. Hence Ons Geld had first the opportunity to present its proposal at a well-attended hearing at the Parliament last October 2015 and now the initiative was debated at the House during a three hours plenary session on March 16th.

Several political parties expressed their support for the citizens’ initiative. “This initiative sends a signal that things need to change” said Member of Parliament Frank Wassenberg (PvdD). According to him, the current system leads to a servitude to the banks and fuels “pressure to produce more and more, which is harmful for our environment.”

Socialist MP Arnold Merkies also welcomed the out of the box thinking of the initiative, emphasizing that marginal adjustments do not work.

Right-wing populist MP Van Dijck (PVV) also finds the proposal interesting but said the Netherlands would need to leave the eurozone as a first step.

No consensus on common solution

Other political groups also shared concerns for the current functioning of the monetary system, but they came up with different proposals.

According to MP Mark Harbers (VVD), a sovereign monetary system could “lead to a communist system in which politicians turn on the printing press.” A concern shared by Christian Democrat MP Pieter Herman Omtzigt (CDA) who argued the Scientific Council for Government Policy should conduct more research into it.

MP Wouter Koolmees (D66) said “The money supply should not be decided in a top-down manner.” The liberal MP, believes in the “wisdom of the crowd” and competition between banks to determine the money supply.

MP Nijboer (PvdA) emphasized that many measures have been taken to regulate the financial sector, but more needs to be done.

Recent research has shown that many Dutch citizens want their bank to provide a safer way to deposit their money. For the Socialist MP Merkies, this is a good reason to establish a State Bank offering non profit financial service, as a way to reduce the power of commercial banks.

However, Minister Dijsselbloem promised to conduct research to investigate the possibility of creating a full reserve bank but insisted that such bank should still contribute to the Deposit insurance scheme.

As of 22nd March 2016 the House voted on several motions tabled by MPs as a followup to the debate. Three of the motions were adopted so far.

The first one calls on the government to carry out research on what is needed to allow a full-reserve bank to operate in the Netherlands.

The second motion, tabled by MPs Pieter Herman Omtzigt and Arnold Merkies, is requesting the Scientific Council for Government Policy to issue an opinion on “the functioning of the monetary system, including all forms of money creation by banks and to take into account the pros and cons of alternative systems of money creation and the size of the seigniorage”

Here is a translation of the motion that was adopted last Tuesday, March 29 2016, in a 108 to 42 vote, with only the ruling liberal party (VVD) voting against:

A third motion that is adopted calls on the government to consider the transformation of SNS-bank, which is currently owned by the state, into a permanent state owned bank, to serve as a public utility.

“It is unfortunate that many politicians still seem to think we advocate for either state banks, state credit creation or other communist constructs.

We are for a clear separation of public and private responsibilities. A liberalised credit market without government interference and risk compensation, which functions on a public money supply that consists of state issued digital cash.

Fortunately, two of our objectives might be implemented as a beginning, removing the roadblocks for a full-reserve bank and an investigation in the merits of the current system and it’s possible alternatives.”