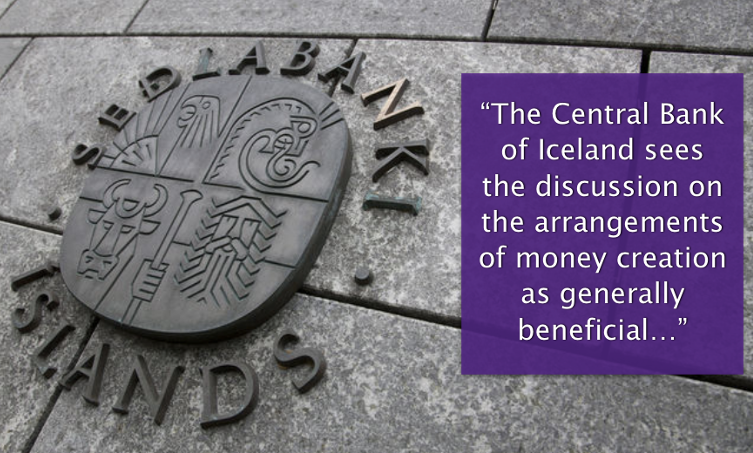 The resolution pushed by 11 members of Parliament to investigate the Icelandic monetary reform and consider the switch to a sovereign money system was put on the parliament’s agenda, with the consent from the central bank.

This article was originally published on Positive Money’s blog.

In February we’ve reported here on the great news from Iceland that the Monetary Reform resolution, calling for the establishment of a special commission to “carry out a review of the arrangements of money creation in Iceland and to make recommendations for improvements”, was put on the parliament’s agenda.

Since then reviews by several organisations and economists have been submitted (including one from Positive Money and a few from other members of the International Movement for Monetary Reform).

Now, after a bit of a technical hickup, nine reviews have been published on the Icelandic Parliament’s (Althingi) website.

The following seven were unsurprisingly supportive: The eighth supportive review was from the Central Bank of Iceland (here in Icelandic).

This is a cause for celebration, as the Central bank was critical in its review on similar resolution three years ago at Althingi. Now, in its 3rd paragraph of the review, it states:

„The Central Bank of Iceland sees the discussion on the arrangements of money creation as generally beneficial and therefore does not propose any amendments to the resolution.“

The only review criticising the resolution came from the Icelandic Financial Services Association (IFSA) – in an lengthy 4 page discussion. Following are some key comments on it:

This sole critic of the resolution and its content shows that the opposition to further research of monetary reform is very limited. This gives raise to further optimism towards the matter within Althingi‘s Commission of Economics and Trade going forward and it will be interesting to see its opinion on the matter.

We‘re now to step 5 into establishing a parliamentary committee on reviewing arrangements of money creation in Iceland (according to the procedure of Iceland’s parliament):

1.      Agenda setting: The Speaker of Althingi puts the resolution in the agenda

2.      First reading: the resolution is debated in plenary

3.      Discussion in committee: the resolution would probably be passed to the Committee of Economics and Trade, headed by Frosti Sigurjónsson

4.      Review: the committee calls for reviews of the resolution

6.      Second reading: the resolution is debated at a second plenary reading

7.      Voting: Minimum of 50% participation is required. Resolution is passed if majority of votes are „Yes“.