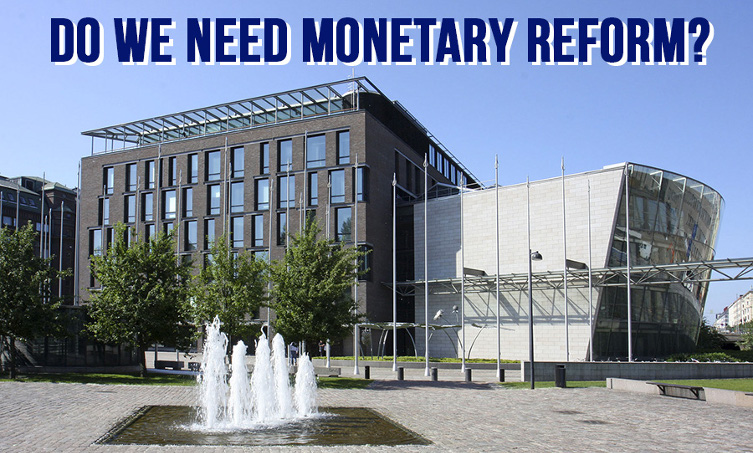 A successful event on monetary reform was held in the Finnish Parliament, featuring valuable expert analysis of sovereign money and two endorsements from Finnish politicians for the QE4People initiative. After pushing the debate in the political scene, the Finnish movement wants to launch a citizens’ initiative.

Article By Valtteri Aaltonen with contribution from Johan Meriluoto and Spencer Veale.

The discussion around money and the problems of the current monetary system has been growing in Finland since the Finnish monetary reform movement Economic Democracy Finland (“Suomen Talousdemokratia”) was founded in 2009. In June 2016, the discussion even made it to the Finnish Parliament thanks to MP Hanna Sarkkinen (Left Alliance party) who hosted an event exploring the question: “Is Monetary Reform Needed?” The event featured presentations by experts and a panel including two other MPs (Olavi Ala-Nissilä from the Center party and Juhana Vartiainen from the National Coalition Party) commenting on our monetary reform proposal.

The event was held at the Visitor’s Center at Little Parliament house June 16th 2016. Before MPs got their chance to comment, Ville Iivarinen, the Chair of the Board of Economic Democracy Finland, made a presentation on the problematic nature of the current money system and the basics of our proposal for monetary reform i.e. a sovereign money system (SMS). He was followed by Karlo Kauko, an adviser on Financial Markets and Statistics at the Bank of Finland, who gave his personal analysis of the subject (he made it clear that his remarks were his own views and did not represent the Bank of Finland).

Iivarinen started by framing the issues related to the current debt-based monetary system and then presented the benefits of full-reserve banking and money creation by the state. He pointed out, for instance, that if the average yearly increase in the money supply was created by the state rather than private banks, the annual Finnish national budget would increase by roughly 6 billion euros. According to Iivarinen this sum could cover the so called “sustainability gap” (a popular but notoriously vague notion related to the gap between the current welfare state budget and projected costs of caring for an aging population). Although Iivarinen emphasized the benefits of a SMS he also warned that any reform has the potential to backfire if preparations are too hasty or corrupt interests are able to take control of the process.

Bank of Finland’s Karlo Kauko confirmed that the monetary system described by Iivarinen was a legitimate proposal. “People arguing that SMS is complete nonsense must be smarter than three Nobel laureates in economics” he sarcastically remarked, referring to the fact that Milton Friedman, James Tobin and Merton H. Miller all advocated full-reserve banking at some point in their careers.

According to Kauko, full-reserve banking could be seen as a centralized (book-keeping) register with strict rules on money creation and how credit institutions manage their balance sheets. However, he pointed out that the current level of bank deposits would require the Central Bank to substantially expand its own liabilities if a SMS was implemented. Since current central bank assets would not be sufficient to cover the liability side of the central bank’s balance sheet in the context of a full-reserve system, he was unsure about how the Central Bank’s balance sheet could be balanced.

Kauko also speculated that a transition towards SMS would be more realistic at the EU or EEA level simply because it would be difficult for a single country within the framework to mandate full-reserve banking while others did not. Under current rules, including unrestricted movement of funds within the EEA, banks could still try to offer services to domestic customers while stationed abroad, for example.

He agreed that the proposal is interesting and that further debate about the monetary system is important. Nevertheless, he also maintained that there are still many unresolved questions about the functioning of a full reserve system. He noted that the political obstacles to the implementation of a SMS could well be insurmountable.

Next, Members of Parliament were invited to share their thoughts on Sovereign Money. For the Center party (currently the largest in Finland) Olavi Ala-Nissilä made a disappointing speech. He left the impression that he had not listened to what the other speakers had previously said. For instance, he argued as though it was an objection to the SMS proposal that “debt is not the solution to, but the cause of this crisis” – a point on which virtually all sovereign money supporters would agree with! Unsurprisingly, he also argued that structural reforms are required for economic growth and recovery to happen in Europe.

Next to speak was Juhana Vartianen, an economist and a MP from National Coalition Party, the third largest party in the Finnish Parliament (which is part of the government coalition with  the Center Party and True Finns). According to Vartiainen, the fact that banks are “too big to fail” creates situation where bankers and big banks have effectively become “public institutions by their function,” while also maintaining a private ownership structure, thus compounding the potential for moral hazard linked to the banking industry.

He agreed with Hyman Minsky’s description of how financial upswings tend to increase systemic instabilities (eventually ending up with wide mismatches in debt maturities, aka “Ponzi finance funding”). However, he also pointed out that there is no consensus among economists on how to prevent such development. Vartiainen noted that more experienced bankers become more cautious in their risk taking, whereas less experienced ones are eager to take risks with new financial instruments that no one understands. Further he suggested that the reason why the banking crisis never reached the Nordic banks in 2008 was due the relatively recent experience of a banking crisis which Finnish bankers experienced in the early 90’s.

Although Vartiainen agreed with our analysis of the financial crisis, he opposed the SMS proposal on the ground that “anyone can print their own money and try to offer it as a means of payment”, perhaps implying the possibility of “near-money issuance” despite full reserve banking being in place. He also argued that if we simply treat money issuance as unproblematic – say in order to fund ever larger public projects – it will eventually “show up” in the value of the currency. In the extreme, he argued, this kind of thinking would lead to Zimbabwe-style hyperinflation.

Finally, Vartiainen emphasized that the Glass-Steagall Act was a brilliant law that was ultimately brought down by the increased political power of arrogant bankers. Nonetheless, he did not propose any solution to the range of issues presented with the current monetary system.

Helicopter money as a first step

Hosting MP Hanna Sarkkinen then said that the SMS proposal and the debate around money creation is important, but was reluctant to support the SMS due to the political challenges and potential dangers associated with it. While she had doubts with regard to SMS she strongly supported the idea of quantitative easing for the people or helicopter money. She explained why contemporary QE programmes are not delivering positive outcomes, at least from the viewpoint of the real economy. According to Sarkkinen, if the ECB distributed 1500€ per European citizen, it would provide the needed boost to consumption and employment instead of further inflating bubbles in the financial markets. In addition to helicopter money, Sarkkinen also saw promise in the Glass-Steagall inspired legislation which her Left Alliance party has been advocating. Although she did not consider SMS a politically realistic proposal, she also conceded that her ideal monetary system would be very similar to a SMS.

During the Q&A, Sami Miettinen from EuroThinkTank also raised the possibility of allowing the public to open accounts at the central bank (digital cash). There was some agreement that this could be possible but Vartiainen and Kauko questioned the efficiency of the proposal and expressed wariness regarding the administrative burden that this kind of reform would impose on the Bank of Finland. Sarkkinen proposed that helicopter money could be injected into real economy through central bank accounts for the citizens.

When asked about helicopter money, Vartiainen supported the idea but stressed that the central bank’s decision making process should not be influenced by politicians. He thought that independent central banks should develop their own proposals for how to implement such schemes. According to Kauko, helicopter money could be a viable option, but only in a situation when the currency is still trusted but the state as an institution is not. On this point, Kauko underscored that the current EU Treaties and Fiscal Stability Pact fundamentally prevent States from directly stimulating the economy.

The founders of Economic Democracy Finland and SMS researchers, Patrizio Lainà and Iivarinen corrected some claims related to perceived problems with SMS. According to Lainà and Iivarinen, the lack of sufficient balance sheet items (assets) that Kauko showed concern over was exaggerated because in the US total reserve balances have already surpassed the 100% level as a result of post-crisis monetary policy. Iivarinen argued also that it is ultimately a matter of imagination and even semantics whether to let Central Banks function with negative capital or have the public simply create new instruments to balance the books of the Central Bank. He also gave the event a deliciously ironic ending by pointing out the paradox that while money creation can be virtually unlimited, politicians are constantly complaining they do not “have enough money”.

Towards a citizens’ initiative in Finland

Next step for Economic Democracy Finland is the launch of a citizens’ initiative Monetary Reform Law (“Rahareformilaki”) in order to propose the introduction of a parallel currency for Finland that would operate under a sovereign money system. This new currency would not be limited by the Fiscal Stability Treaty etc. and it would become legal tender in Finland with a floating exchange rate against the euro. Under Finnish law, citizens can propose new legislation to Parliament if they are able to collect 50,000 signatures within 6 months. We aim at launching the citizens’ initiative in November 2016.