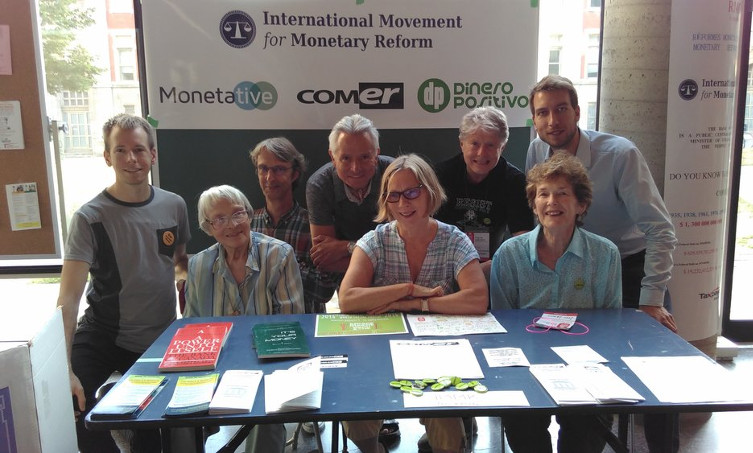 This summer a group of Canadian, German and Spanish monetary reformers were present at the World Social Forum in Montreal to educate activists from all over the world about the implications of money creation.

It all started when Joseph Pilon, a Montreal-based Canadian, decided on his own to invite organizations that are part of the “International Movement for monetary Reforms” (IMMR) to take advantage of the World Social Forum, a big gathering of the Alter-globalization movement to introduce money creation. Manfred Freund (Dinero Positivo, Spain), Ann Emmet and Herb Wiseman (COMER, Canada) and myself (Monetative) responded and were able to make it to Montreal.

Lectures on the structure of the current monetary system, the full monetary system as an alternative and the trial COMER held against the Bank of Canada were held on the first day and discussions about ways to take action together strategically on behalf of IMMR to advance money reforms was held the next day.

The UQAM University (University du Québec à Montréal) was the venue of this year’s World Social Forum. For the first time in its thirteen-year history, the World Social Forum (WSF) happened in a western industrial country. It previously had always taken place in Third World countries.

On August 10, a total of three events were held on behalf of IMMR which consisted of presentations by Manfred Freund, Ann Emmet, Herb Wiseman and me. Herb Wiseman (COMER, Canada) moderated the events and introduced the topic of money and monetary system, Manfred Freund (Dinero Positivo, Spain) presented the history and structure of the current monetary system, Ann Emmet presented the history of the Bank of Canada, spoke about the dispute between COMER and the Bank of Canada and showed videos of a public event involving COMER and the lawyer Rocco Galati, who led the trial against the government of Canada (cited below as video).

COMER’s fight against the Bank of Canada

The Bank of Canada was founded in the mid-30s only to provide the state and municipalities interest-free loans. In the period between 1938 and 1974, up to 30% of government expenditure could be funded by the central bank through money creation. The Canadian government used these funds to finance their activities during the Second World War, the transnational highway and Railway, and other public systems. The government debt remained remarkably low and fairly stable over these 4 decades.

Ann Emmet described her time as a high school teacher as a very fulfilling time as the state supported and funded many ideas in education. In 1974, however, the Bank of Canada was subordinated to the Bank of International Settlements (Basel), which forbade central banks to finance their own states. Since that time the Canadian government borrows money from private commercial banks and has to pay compounded interests. As a result, the national debt has risen steadily. In 2015, the debt was reported to be 91.5% of the GDP or around 630 billion CAN $. The special thing about the situation of the Bank of Canada is that it is still required by law to provide the state interest-free loans. However, since 1974 it did not exercise this duty, as can be seen from the following chart showing the national debt of Canada since 1936.

Until 1974, the Bank of Canada was still required by law to provide interest-free loans to the State.

The following videos help to get a deeper perspective of the situation in Canada. In the first one that was recorded in Montréal (April 26, 2015), Ann Emmet and Rocco Galati explain the lawsuit held by COMER against the government of Canada for not using the Bank of Canada (duration about 2 hours). The next video shows an interview broadcasted by one of the largest television companies in Canada: “CBC News” (duration 17 minutes). In addition, a short documentary on the Bank of Canada from the perspective of Bill Abram, a deceased member of COMER (25 minutes).

I am grateful that I had the opportunity to be there in Montreal at the World Social Forum on behalf of Monetative and believe that this event have strengthened the cooperation between IMMR members.