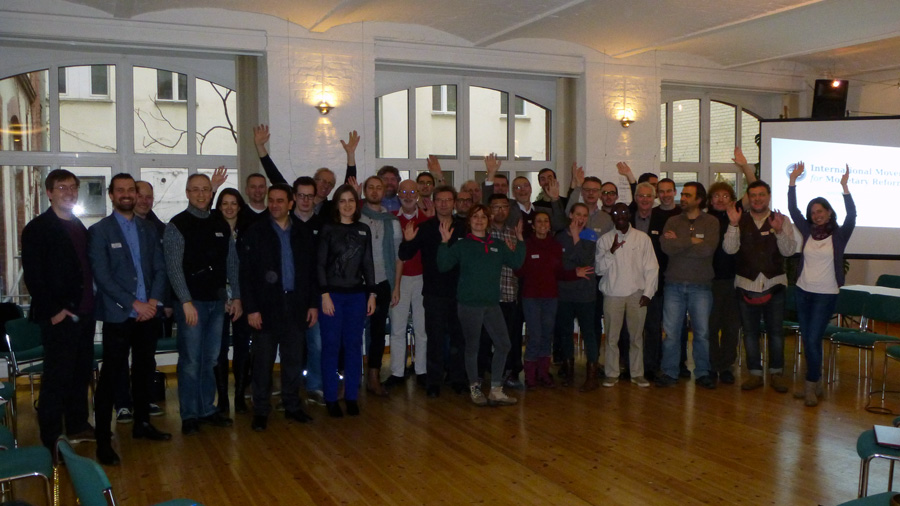 The second official meeting of the International Movement for Monetary Reform (IMMR) took place in Berlin on February 17-19, 2017. The meeting was a successful gathering and significant steps were agreed to consolidate our organisation and inspire our future actions.

The IMMR was launched in 2013, but its very first physical gathering took place in Brussels just one year before. It was organized by Positive Money in order share their experiences with campaigning for money reform. Generally, Positive Money had pretty much taken the lead in building the IMMR, and had hired Stan Jourdan as an international coordinator to strengthen cooperation within the 22 member organisations across the World.

A year and a half later, it was however time to build a stronger organisation with more distribution of power in order to make IMMR more functional and resilient. Key issues such as membership rules had to be addressed by collective thinking more than one person alone. Very timely the German organization Monetative had taken the initiative to organize a second IMMR meeting in Berlin.

The goal of the meeting, besides mutual learning and networking, was the development of a stronger and more democratic governance of the IMMR. A total of 40 participants from more than 20 countries attended the meeting. Most came from Europe, but there were also representatives from much more distant countries such as South Africa, Israel and the United States.

The event started Friday afternoon with several short pitches on different topics and ideas. For example, Lars from Sweden reported on successful meetings with the Swedish Riksbank, which as a result is now proactively addressing the issue of digital cash. Prominent sovereign money advocate Joseph Huber presented his new book “Sovereign Money“. Angela from Spain showed artistic graphics to reach people regarding the issue of money reform, and Luuk from the Netherlands presented their brand new board game “The Money Makers”, in which the players slip into the role of banks who speculate excessively and finally create a financial bubble. He had brought a copy, which was intensively played in the evenings and caused a lot of enthusiasm and insights among the players. In the coming months, the game will be translated into German and English!

After those short inputs, we spent the rest of the evening with an introductory round in which different national groups reported about their monetary reform status quo, challenges and successes. It was very interesting to note the diversity of the groups and the participants. From young to old, scientists to artists it was quite fascinating to observe the different approaches of the groups on the issue of monetary reform. Obviously, the diversity of the groups offers an enormous potential for networking and the exchange of the respective strengths among member countries.

At last, Stig from Denmark played a self-composed song with his guitar about bankers and the madness of the money system – a really nice ending for the first day!

Saturday started with an open Fishbowl discussion on the future of the IMMR and the various needs, challenges and ideas stemming from all participants. Those inputs were further discussed after lunch, in smaller groups. Three key issues were discussed: to clarify possible criteria regarding the admission of new member countries; the establishment of a “core group” and the adoption of an official IMMR charter. The results of the small groups were collated and further deliberated in focus groups on the respective topics in order to develop concrete proposals. Later in the afternoon, there were several “open spaces” to either devote to new topics and ideas, or to continue the discussions of the focus groups.

After a long working day and dinner, it was time for some entertainment. The German organisers had the brilliant idea to hire a professional magician. In contrast to the commercial banks, who can “only” create deposit money, to everyone’s amazement, the magician could even create physical cash out of thin air!

After that, most ended the evening with a pub visit and some beer or played “The Money Makers” board game. Meanwhile a tiny group of participants formed a focus group to design a proposal for  the IMMR future “core group” which would be discussed the next day.

Election of the core group

On Sunday morning, their concrete proposal for the “Core Group” was presented and after an animated discussion finally agreed on! Afterwards, seven members were elected for the Core Group through a very interesting process called the “election by consent”: Lino (Germany), Luuk (Netherlands), Stavros (Greece), Sigurvin aka ‘Vinnie’ (Iceland), Lucija (Croatia), Redge (South Africa) and Lars (Sweden).

The success of this process led to great relief and enthusiasm, because one of the main goals of the meeting had been achieved, paving the way for a more successful future for the network.
While the first meeting of the freshly elected Core Group took place, albeit for a short time, there were some more “open spaces” for various topics, such as monetary reform in the Eurozone, the establishment of a joint database and social media.

Afterwards, ideas from the first Core Group meeting were presented regarding the admission of new IMMR member countries, and the participants agreed to take the Italian group officially onboard, giving rise to some collective celebration.

During the closing round, all participants were offered to share their feelings, thoughts and feedback about the meeting. All were very satisfied with the meeting, and everyone was very optimistic about the future of the IMMR. There was, despite the success of the meeting, palpable exhaustion among the organisers.

Additionally, thanks to self-determined contributions by the participants (who were asked to donate “as much as they can”), the finances were perfectly balanced at the end of the meeting so that there were no unplanned expenses for the German organizers. Again, this was a great expression of mutual solidarity and trust among the participants. In addition, it had worked very well to involve many of the participants in the organization on site through volunteer teams (eg providing coffee & tea, caring for the dishwashing machine, monitoring breaks / timing). This saved not only additional paid helpers, but also encouraged the sense of community.

Last but not least, the various interactive and partly self-organized discussion formats and methods (fishbowl, open spaces, consensus selection…) had worked extremely well and helped to unearth the full creative potential of the group.

All in all, the meeting was therefore a full success and left everyone with many fresh impulses and great motivation. One can be sure that exciting times are ahead for the IMMR with many surprises, ideas and successes awaiting us. With all the positive, creative potential that has gathered around the world on the issue of monetary reform, there is room for great optimism that a new, better monetary system in the service of humanity is possible and attainable!