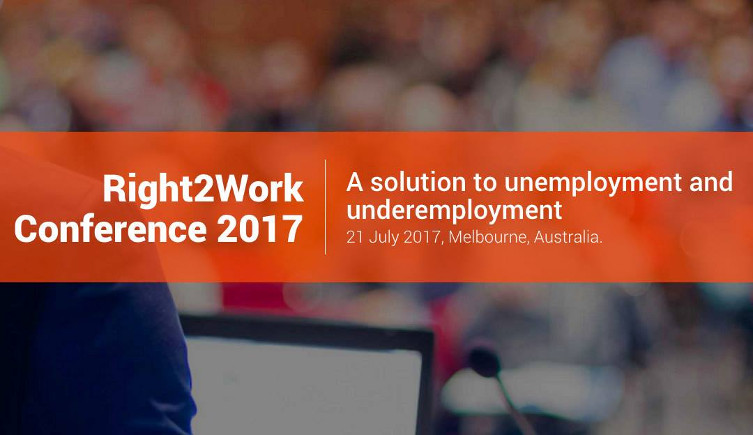 On 21 July 2017, Fair Money Australia collaborated with members and supporters of the Australian Unemployed Workers Union (AUWU) and Australian Workers Party (AWP) to create a conference to launch the Right2Work Coalition. It is more costly for a society to keep people unemployed or underemployed than it is to employ them, so the coalition advocates for full employment by using a federally funded job guarantee (JG) program.

If you’re not familiar with JG, it simply recognises that unemployment exists because there isn’t enough money circulating within the economy to hire everyone (there’s plenty of work that needs to be done and plenty of people who would do it – all that’s missing to bring the two together is money!) and that the central bank can create the money to end unemployment. Important elements include the fact that no additional taxation or borrowing is required and that JG is counter-cyclical.

After the initial welcome and introductions, the day began with a series of five minute presentations on ‘the human face of unemployment’, followed by a panel discussion. The speakers included: Tanya Corrie (expert on financial exclusion, income security, cost of living and essential services for people on low income) from Good Shepard Australia; Sophie Johnston, President of the National Union of Students; and Owen Bennett, president of the AUWU. This was a powerful opening to the conference which exceeded all of our expectations.

Following the opening plenary, presentations were delivered by three well-known Australian economists. Prof. Steve Keen from Kingston University (UK) talked about why Australia faces an unemployment crisis when the housing bubble ends; Jim Stanford from the Australia Institute discussed the future of work and how full employment, the casualisation of the workforce and automation will interact; and Warwick Smith from Per Capita gave a presentation on what a Job Guarantee policy is and how it can eliminate involuntary unemployment and resolve the converging crises of private debt fuelled recession & technological unemployment. After a workshop session with conference attendees, there was a panel and plenary discussion with the speakers where they talked about how to change Australia for the better and discussed ideas that arose from the workshop.

The feedback from conference attendees was entirely positive, but even more impressive is that economists from other cities around Australia who hadn’t attended the conference said that they heard it was a good and worthwhile event. It was a great launch for the Right2Work Coalition, whose members include several trade unions.

What’s the benefit in coalition-based events?

The idea of holding a conference originally came about from a discussion between two people from the AUWU and the Australian Employment Party (AEP, which later merged into the AWP). It took form when an action group was assembled, comprised of the instigators from the AUWU and AEP, two directors from Fair Money Australia and a person who works for a local government in Victoria who chaired the meetings and did a lot of work on the ground. They were joined by another person who made the conference website (including graphics) and a lawyer who was very active in organising and became the compère for the conference.

After securing a venue in central Melbourne for free, thanks to the AUWU, organisers also used Eventbrite to sell tickets which covered the other costs of hosting this convening. They sent e-mails to several thousand people from personal contacts (each co-host was connected to economists, charities, etc.) and posted on social media.  While food was provided, the entire operation was run on a shoestring budget and none of the speakers that were approached sought payment other than flights and accommodation.

The top learnings for the organisers of the Right2Work conference were:

And finally, whatever ideas people have, even if they’re great, it helps if they’re not wedded to them because things can evolve in such a way where some terrific approaches may be left behind.