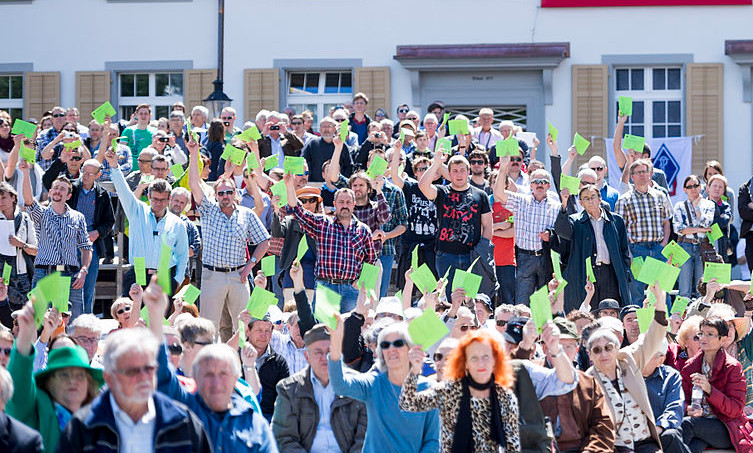 Thanks to the hard work of Monetäre Modernisierung (MoMo), the Swiss member organisation of the IMMR, in 2018 Swiss citizens will get to decide on the Vollgeld Initiative, which advocates for money creation by the National Bank alone. The Initiative stands against the privatization of the Swiss franc and the current system by which 90% of Swiss money is produced by private banks. Follow along below for five questions & answers about the Swiss Sovereign Money Initiative, followed by an description of how Swiss direct democracy actually works.

1) What is sovereign money?
Sovereign money is the money that a central bank brings into circulation. At the moment, this consists only of the coins and bank notes in circulation. This legal tender makes up only 10% of the money in circulation in Switzerland. 90% is electronic money or book-money, which is created by the banks at the click of a button to finance their business (bank loans, mortgages, financial products). Most people believe that the money they have in their bank accounts is real money i.e. real Swiss Francs (or pounds Stirling etc). This is wrong! Money in a bank account is only a liability of the bank to the account holder, i.e. a promise the bank makes to provide money, but it is not itself legal tender.

2) What would change with the Swiss Sovereign Money Initiative?
The way the money system works today doesn’t comply with the intention of the Swiss Constitution (Article 99: “The Money and Currency System is a matter of the State”). The sovereign money initiative will correct this. The Swiss National Bank alone will be able to create electronic money. Banks won’t be able to create money for themselves any more, they’ll only be able to lend money that they have from savers or other banks, or even, if necessary, money that the Swiss National Bank has provided them.

3) What are the fundamental advantages of sovereign money?
Sovereign money in a bank account is completely safe because it is central bank money. It does not disappear when a bank goes bankrupt. Finance bubbles will be avoided because the banks won’t be able to create money any more. The state will be freed from being a hostage, because the banks won’t need to be rescued with taxpayers’ money to keep the whole money-transaction system afloat i.e. the “too big to fail” problem disappears. The financial industry will go back to serving the real economy and society. The money and banking systems will no longer be shrouded in complexity, but will be transparent and understandable.

4) What will happen to banks after a sovereign money reform?
After a changeover to sovereign money, the banks will continue to offer all the normal financial services (giving credit, enabling transactions, wealth management etc.). However, there will only be central bank money in our current accounts at the bank. This electronic money has value exactly like today’s coins and bank notes have value. The banks can only work with money they have from savers, other banks or (if necessary) funds the central bank has lent them, or else money that they own themselves. Banks won’t have an unfair advantage over all other market participants any more, as they won’t be able to create money any more.

5) What will be the effect of sovereign money for bank customers?
From the moment that sovereign money is introduced, there’ll only be money guaranteed by the
central bank in all transaction bank accounts. The banks must manage these accounts like they
manage accounts for stocks and shares. The money will belong to the bank customer, and it won’t be lost if the bank goes bankrupt, but it won’t yield any interest. Anyone who would like to get interest rather than have “bank-crisis-safe” money can, as now, put their money in a savings account or in other investments that give interest.

Switzerland has a direct democracy, which means that anyone can start a people’s initiative on a proposed change to the constitution, and, if they can collect the requisite number of valid signatures, there will be a binding national referendum on the proposed change. The process for bringing a Swiss people‘s initiative to referendum:

1) The people bringing the initiative must formally submit the text of the proposed change of the constitution to the official government offices in Berne. They must agree on the text for the translations into other official Swiss languages with the officials, and a launch date for collecting signatures.

2) After the launch date people can start to collect signatures. This must be done using officially approved forms which must have the proposed change to the text of the constitution in one of the official Swiss languages.

3) The signatures collected must be validated by each local government office (people signing must be eligible to vote in Switzerland and may only sign once).

4) Within 18 months of the launch date over 100,000 validated signatures must be handed in to the government office in Berne.

5) Within a few weeks the official office confirms whether over 100,000 validated signatures have been received.

6) The initiative is then forwarded to the Swiss Federal Council. They have up to a maximum of one year to discuss the initiative and make their recommendations (to accept or reject the initiative) with their reasoning.

7) The initiative is forwarded to both houses of parliament. They have up to two and a half years to consider the initiative, and then they must make a recommendation (to accept or reject the initiative) with their reasoning.

8) The national referendum will normally take place between 5 and 10 months after parliament has made their recommendations. A booklet is sent to each eligible voter together with the ballot slips about a month before the vote. This booklet contains the proposed new text for the constitution (as written on the forms for collecting the signatures), an explanation of the initiative written by the people bringing the initiative, and the recommendations (with reasoning) from the Federal Council and both houses of parliament.

Note however: the Federal Council or parliament may make an alternative proposal, in which case the process is even longer!
As of January 2017, the Swiss Sovereign Money Initiative is at step (7) above, where it is waiting to be discussed in Parliament. The Federal Council has not suggested an alternative proposal, and has recommended that voters vote for the status quo, not for the proposed changes. The referendum will probably take place in late 2017 or 2018 if no alternative is proposed by parliament.

Criteria necessary for a people‘s initiative to win at referendum In the simple case (without an alternative proposal):

What happens after a proposed change to the constitution is adopted?
The constitutional text is amended; however, the law must also be amended – this is a slow process that is likely to take more than a year. It is during this process that many of the legal and practical details of the changes are worked out.

For the latest campaign updates, follow along on Twitter to support the movement for sovereign money reform in Switzerland!