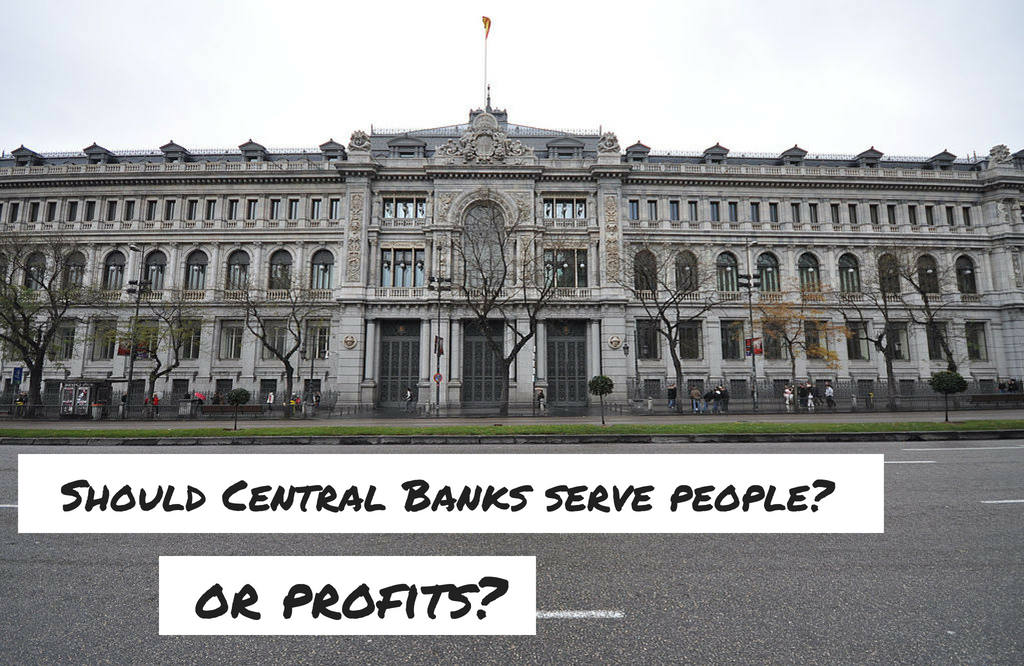 This article was originally published in the Spanish newspaper EL MUNDO in February 2018. It is by Carlos Arenillas, economist, former vice president of the CNMV (Spanish Securities Supervisor), and former member of the board of the bank of Spain.

A friend of mine asked me that a few months ago after the crisis – something that created a good deal of anguish for him – in the Banco Popular. It took me some time to answer him. I will significantly summarize what I told him.

I answered him that unfortunately nowadays he could not because the regulations do not allow it. However, if people and companies could put their money into current accounts in their Central Banks it would be one hundred per cent safe in nominal terms, without deducting for inflation, and that besides that we would not see the recurring banking crises or suffer their high costs.

Our current monetary system, and as far as I know, that of all other countries, is odd in the sense that, contrary to what many people think, the production and distribution of money is, for the most part, privatised: it is the private banks and not the State or the Central Bank that are mainly in charge of this important economic and social function.

It is true that the State, through its Central Bank, holds the monopoly on issuing banknotes and coins but that only makes up approximately 10% of the total amount of money that exists in developed countries. The remaining 90% is “deposited” in the banks as entries in computers. “Who made this digital money?” asked my friend. “Well, it is mainly the banks themselves who do it.” I answered.

He asked me to define money. I told him: the money available in any country at any given moment is the sum total of the banknotes and coins in circulation plus the money deposited in the country’s banks. The amount of money is key to healthy and inclusive economic growth.

Money is created in two ways. One: the money created by the Central Bank when it prints physical money, banknotes and coins, and every time it issues digital money to lend to the banks, reserves, or, most recently, to buy public and private bonds, the so called quantitative easing. The other: the money created by the banks every time they grant a credit, (this absolutely dumbfounded my friend). Likewise, they destroy money every time a credit is paid off, or when the Central Bank withdraws liquidity from the financial markets or banknotes and coins from circulation. Both that 10% of physical money and that 90% of digital money are considered money, although they are not the same. The physical money and, listen up now, the digital money that the banks have in the Central Banks are fully guaranteed by the State, at least for their nominal value. The rest of it is not guaranteed in the same way. This is very important because it generates weakness and instability in the system. We could say that the former is safe money and the latter is weak money as it depends on the wellbeing of the banks.

It is true that since the last big crisis in 2008 the State now guarantees up to 100,000 euros for every depositor should a bank become insolvent, but that does not cover the digital money that the banks created. Moreover, this is a huge help to the public for which the banks pay very little. No private sector has similar protection for its activity. This is where my friend, stunned as he was, said that none of this was very reassuring.

I warned him that there was more. Given that the majority of the money in circulation is created by the banks through the granting of credits, it is money that carries with it debt and a type of interest. “Listen.” I told him. The physical money created by the State has no interest but the digital money, (credit/debt), created by the banks does.

Obviously the banks are private institutions that try to maximise their economic profits. Their goal is to grant the largest amount of credit possible, creating money and debt, meeting, at their discretion, the demand for credit, while complying to the regulations and trying to minimise the amount of unpaid debt. But banking crises almost always happen after periods of strong credit growth. During the years prior to the last crisis, credit grew at rates way above the nominal GDP rate, worsening the problem of excess debt in the economies until the system, like has always happened and will always happen, collapsed.

We try to mitigate many of the serious problems created by this monetary system by levying complicated regulations on the banks, intervening national and international supervisory organisms and by providing important aid to the bank, both in economic terms as well as in terms of strong protection against the competition, (there are increasingly fewer, but larger, banks). However history shows us that the results have been vague. Thus, governments and supervisors, companies and citizens are almost always worried about the wellbeing of the banks: in the current system, if the banks do not make money, society will have serious problems.

The private banks not only make the majority of the digital money that society needs through granting credits and generating debt but they also use their own criteria to decide who should be granted a credit. They do not always do this adequately as the recurring real estate bubbles, for example, demonstrate. It is a fragile system and it is also unfair to a certain degree.

If besides the creation of money, all the new, digital and physical money, were a matter exclusive to the State through its Central Bank, we would not depend on the mood of the banks so much for money to flow to the economy. “To whom would the new money created by the Central Bank be given?” asked my friend, now with sparkling eyes. I suggested that we should leave that explanation for another day, but that it could be given to the State or to the citizens or to both.

At this point my friend said that what I had described about the current situation sounded to him like the State putting the administration of penal justice into the hands of private entities and not into those of the judges thereby forcing citizens to pay for justice. I told him that it was not the same but that his analogy did make a point.

At the end of our long chart, it seemed to me that my friend was a bit more informed but just as worried but I hoped that he was still interested in the topic of his question. However he did not leave without asking another slew of questions: “Why don’t they change this situation and let me have an account in my Central Bank? Why is it only the banks that can have safe money and the rest of us have to have weak money? Why don’t they at least talk about this all publicly?” I told him that they were all good questions. I recommended some books, videos and articles. I encouraged him to read them and I suggested that we could continue talking after he had.