How do we change the rules for banking in favour of the people?
Teach children how banks work. This was the last wish of Sue Hamill, the founder of Positive Money New Zealand. PM NZ is leading the charge in the case of The People vs. The Banks in New Zealand. Before Sue passed away, she put aside to develop a digital game that teaches young people how banks create money now, and how it could work in favour of the people, with Sovereign Money.

Sue’s husband Don Richards, fellow founder of Positive Money, went searching for a game company that could deliver on this idea. Via the International Movement for Monetary Reform he came in touch with the designers of the board game Money Maker. Who also happen to run a digital gaming company called Pillar Games. Before long, a collaboration was set up and Pillar games was making a game called Boom Bust Inc. Don has kindly made this game available to the whole IMMR community. If you want to check it out, you can play it here right away. If you want to learn more, read right along.

Below we will take a look back at the game design process, to give you a little bit of an insight into why we made the decisions that we made, and how this impacted the game. This will give away key information about how the game works and how it is played. If you want to experience it ‘fresh’, now is the time to go play it first, before we spoil the whole surprise away for you.

The market and the bank

Bank credit is a derivative of money. Money is used to trade goods. When we designed the board game Money Maker we developed a simple system that simulates a small economy with Assets, Products, and Product Prices going up and down based on supply and demand. We directly translated the design of Money Maker’s procut markets and product creating assets into the game and added a total of six different sectors. This became the canvas upon which the player can paint with credit.

There are six sectors in Boom Bust Inc City and each has their own product which it sells to other sectors. This leads to a supply and demand, the interaction between which influences the price to go up and down. The business model of an individual company is shown in the loan application. The player can evaluate the current prices of the business model and calculate at a quick glance to see if it is profitable or not. 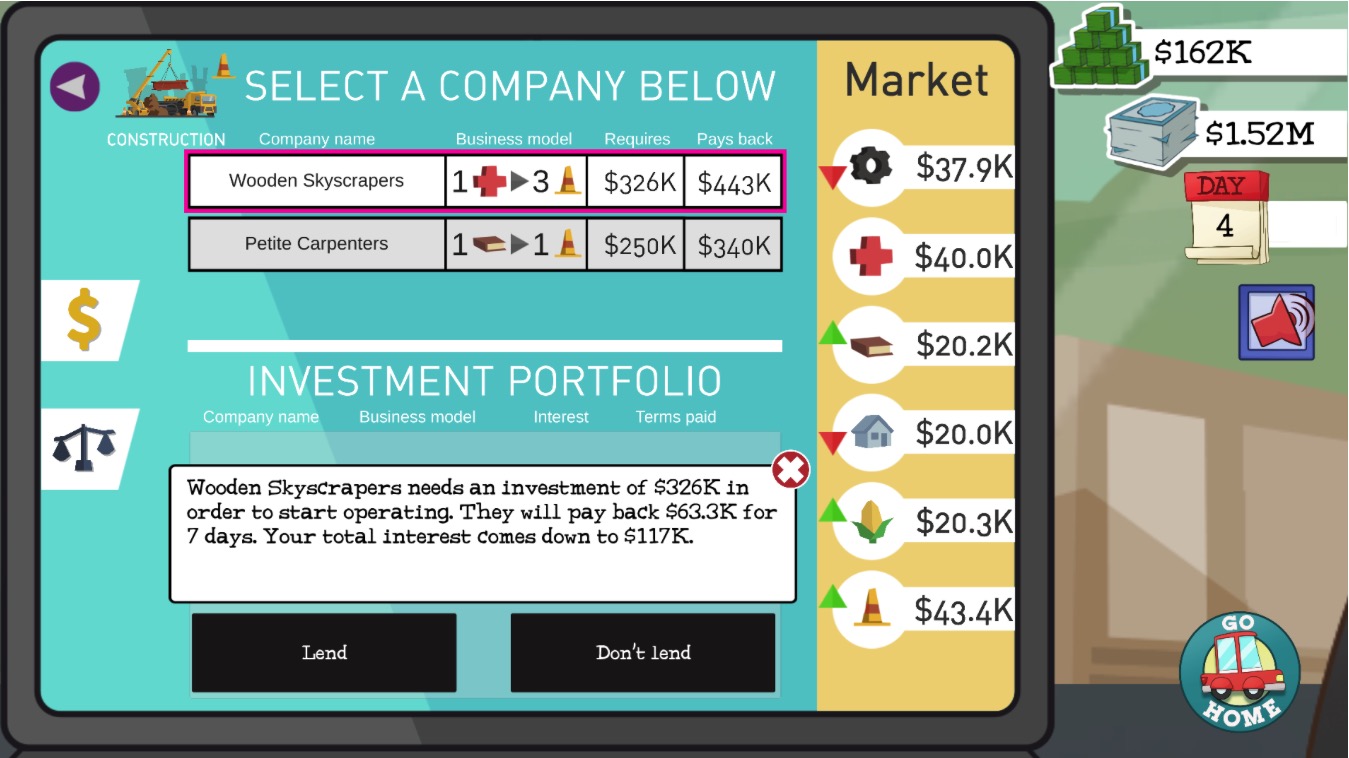 Many players found this difficult to understand, so in hindsight one may wonder if this is the best approach. The reason we made this decision is to have an actual economy that the player invests in. Another design possibility was to simply present loans with percentage default chances, in such a way that the player is basically playing in a casino on credit. This might be less realisitc model, but since the model happens on the computer and is invisible to the player this might be a better option as well. Still as amateur economists, we are a little in love with our own model (a well known economist disease) which might explain this design decision.

The boom and the bust

When the player lends money to a company in the game, he creates credit on the bank balance sheet. This credit is in addition to the money that is already in circulation in the game’s economy. Money in the game, as in real life, buys products. So additional credit is more money to go around. Therefor credit drives up the prices of products. 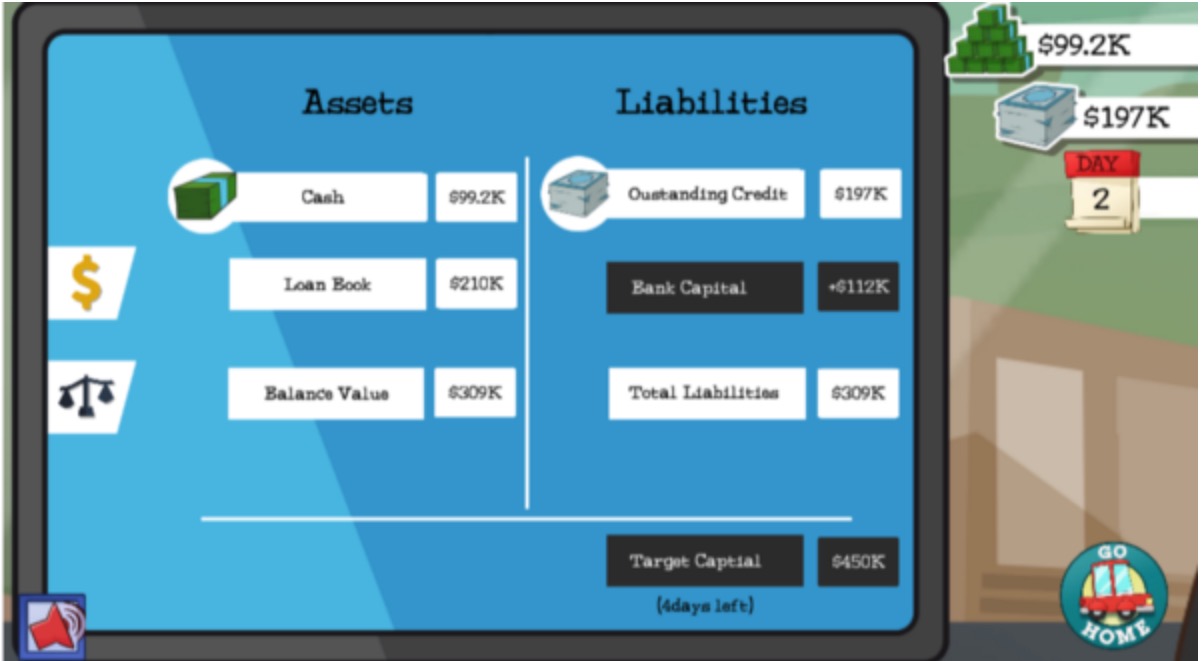 As a player, you lend credit to the different companies, which is used to expand their business. Thus in the short term, there is extra demand for products. When these companies you lend to have expanded their business, they generate extra products, so in the long term, there is extra supply. The player sees the result of this mechanism in the level of the prices. For a player the effects of his actions on the prices are indirect and difficult to trace. But when the extra supply created by the player’s credit investing causes the prices of industries to drop, the resulting bankruptcies of his loan portfolio cannot be ignored.

The Cast of Characters. 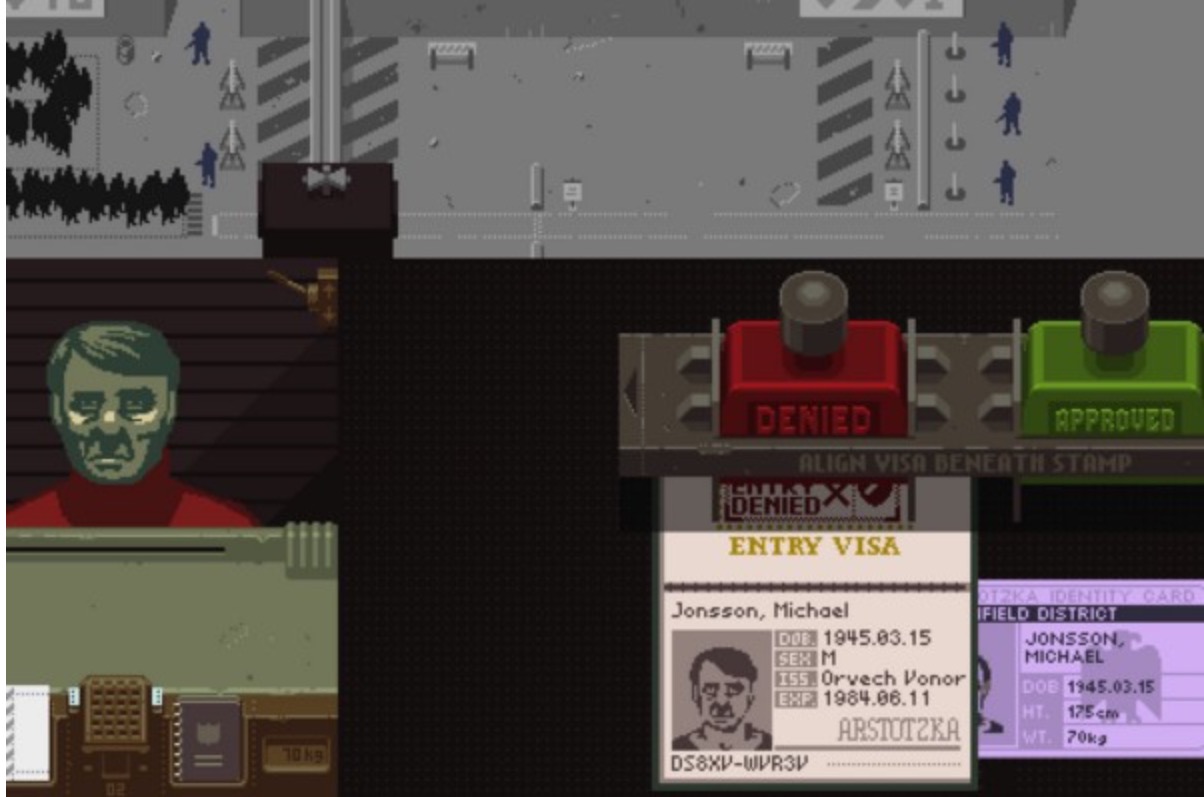 Our first idea with this game was to go with a more Sim City-esque look where the player would be viewing the city like from a helicopter and deciding on which properties to invest. One of the drawbacks of this point of view was that it would not be easy for the player to bond with the people he is lending to, at a great distance from above. And it is in the lending to and interaction with the people that a lot of the personality and ethical choices take place. So we opted for a view that is inspired by famous indie game “Papers Please”. The player has a banking desk job and has customers coming by who he interacts with, and who ask him for patience if their loans are overdue.

Taking money out of the bank

While playtesting we found that player understood the business model of the bank, and how this relates to price increases and even booms and busts. So this main goal has been accomplished! But many players reported after playing that they did not feel like a banker. 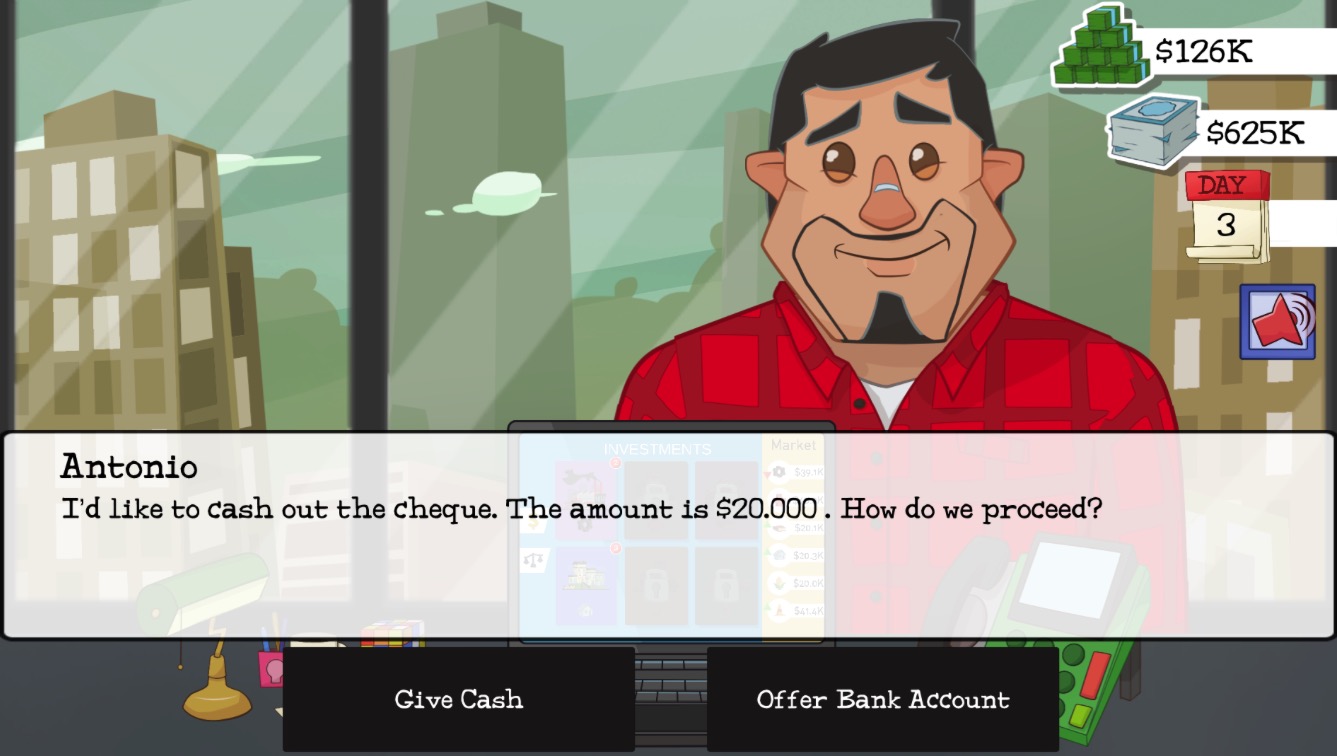 To address this we added one more thing: on the players second day, there is a character who tries to take his money out of the bank. Everybody has at some point in his life taken money out of their bank, so this is something that everybody can relate to. People generally do feel that their money is safe inside the bank. But when we see this transaction from the other side we see it very differently. It becomes a bit scary to give away large amounts of cash from the bank vault, even though the client has every right to it. This helps players understand one of the reasons why banks have capital controls. 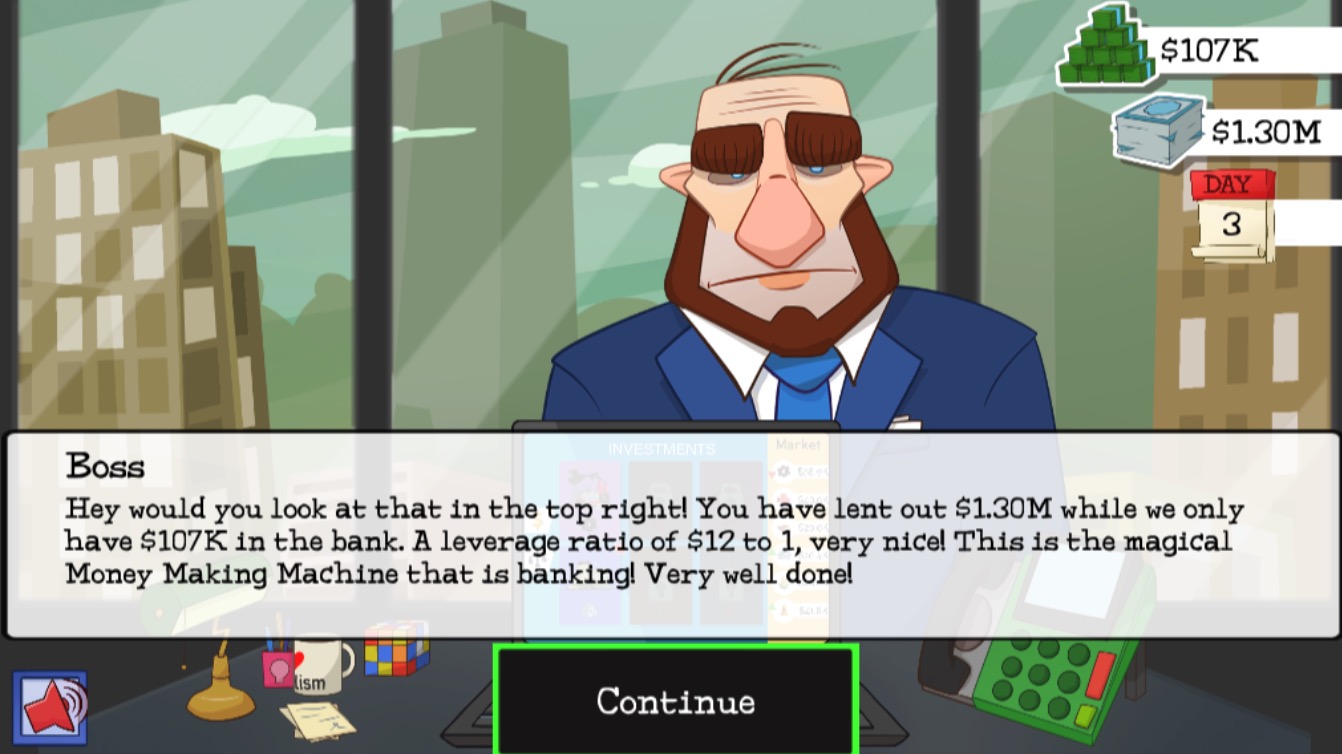 A very important character for the player is his boss, who comes in regularly and gives the player guidance and targets. These targets are like Sisyphus Labour: every time that you meet the target they increase. The only way that you can get by this, is to keep on pushing loans. Even if you know that the business model does not work, at least the lender will pay interest for the first few terms of the loan, getting you closer to your precious target. Later on in the game there is a more pessimistic character, Jimbo, who complains about these insane ever increasing targets and the ever decreasing reserver ratio of the bank. “if more than 8% of our customers take their money out of the bank, we are done for! I do not know about you, but I will be far away on a very nice island when that happens”

Eventyally the players bad descisions catch up to him and when there are too many bankrupcies, the bank goes bankrupt. And in this game which is set in a fantasy universe to our liking, the government does not save the bank, but instead starts a new age with sovereign money. In this phase the player meets Sue, who is named after Sue Hamill, in whose memory the game was created. Sue introduces the player to his new job; which is pretty much the same as his previous job; but with two important differences. First: there are no more targets, but instead there are society points which the player must try to max out. And second, of bigger impact to the player, there is only so much money that the player has available to invest. After this money has been invester, the player must wait for his investments to yield enough return that he can invest more. This seems more boring to the player, but it comes with an very important improvement for the in game economy; there are no more booms and busts!