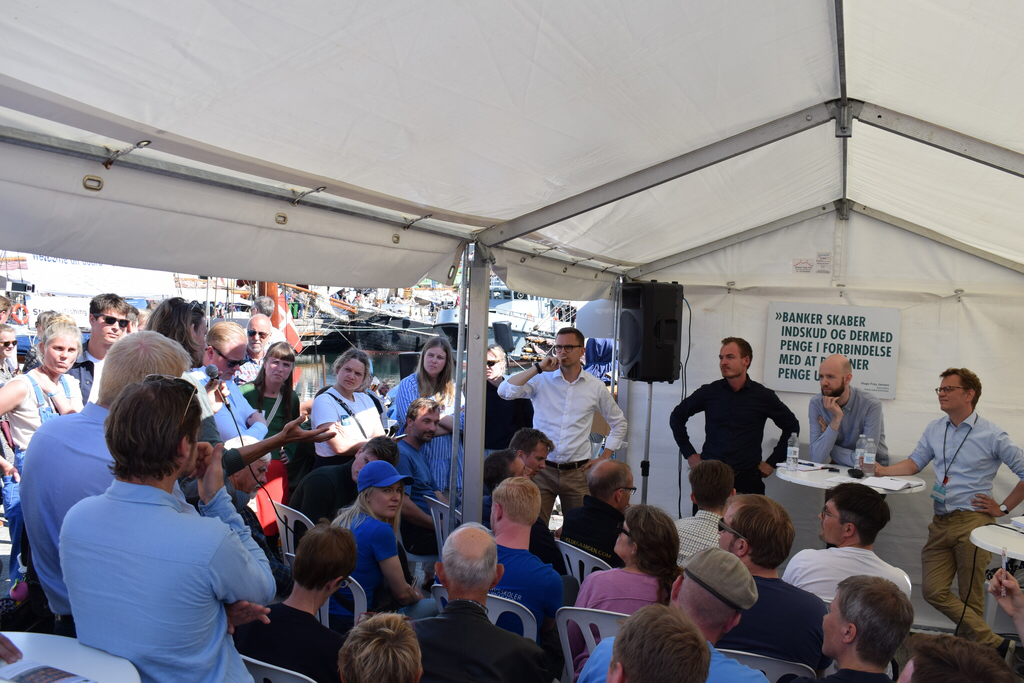 Some of our national members from around the world have generously come forth to share with us their stories of traction to help inspire and foster increased global momentum towards a money system that better serves humanity.

Over the last few months the Alliance has been supporting two of our members How We Pay Campaign.  Board member Virginia Hammon (Author of US Money: What is it? Why we must change. How we can) and AFJM member Mark Pash (Author of Creating a Win-Win Economy: Solutions for the Robotic Age) collaborated to publish their joint work entitled How We Pay For A Better World.  The campaign is a multifaceted effort to bring awareness about monetary reform to U.S. citizens. It involves not only a book but also a country wide tour visiting various conferences, fairs and gatherings to spread an understanding of how Just Money can pay for a better world.  Below is a link to a video narrated by Virginia Hammon promoting the campaign.

In other efforts, the Alliance has been working on increasing its social media presence through Facebook and Twitter.  We plan on beginning a paid social media campaign in the next month utilizing videos that are currently in production and near completion.  We have also continued publishing our monthly newsletter and conducting our monthly Coffee House discussions for our membership and subscribers.

We have had some exciting recent recent activities and have more of them to come:

1) As usually we went to  “Folkedemødet”. This is a political people’s fair on the island of Bornholm that lasted for 5 days in June.

We have our own large tent with about 5 events a day. (Debates, speeches, quizzes, presentations, workshops etc.) .This year we were 25 volunteers from Gode Penge there. 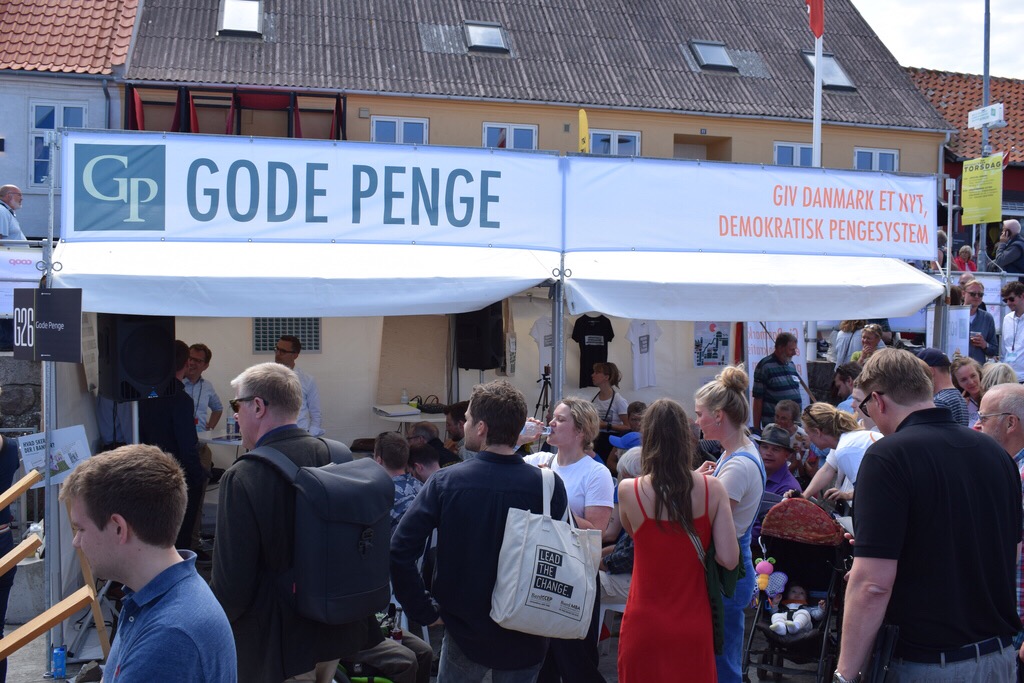 2) Book release on the first book ( title translated: “Money as fairy dust”) on our brand new  publishing company Gode Penge publishing. At the same time our yearly Gode Penge party which is open to the public. (9th of November)

3) Danish championship in the board game Money Maker planned for two weeks before Christmas in collaboration with a Copenhagen high school.

4) Our next lecture series called “money talks” will be held 4 Wednesdays during the winter months (November-February).  This series is on specific professors influential to our thinking.

6) We have had 3-4 articles in the national newspapers the last 2 months.

– One on the drivers of housing prices increases (i. e not lack of homes)

– One on possibilities of central bank funded green investments.

7) planning to make a media campaign on the “money week” in Danish school were bankers are teaching in the Danish schools. We are of course sad that there is no room for money creation in their material.

We have more great work to share if there’s anyone in the community who might be able to help with Danish to English translations.

The association of private banks in Germany also invited us to talk about Digital Currencies – we will meet them in December. What means “meeting the devil himself” – and discussing with him the “heaven of sovereign money” – what do you think his reaction will be?

We are in the run-up to another parliamentary debate following citizens’ initiative ‘Ons Geld’. On the agenda are the ‘money and debt’ report of the scientific council for government policy (WRR), and a proposal of socialist MP, Mahir Alkaya, to form a parliamentary committee for the implementation of 100% safe money.

We’ve determined our position in the political debate and helped various MPs determining their position too. There seems to be a broad consensus now to implement ‘a safe alternative to the bank account’. In 2016 Parliament voted unanimously in favour of such an alternative but found both the central bank and the Finance Minister reluctant to deliver. 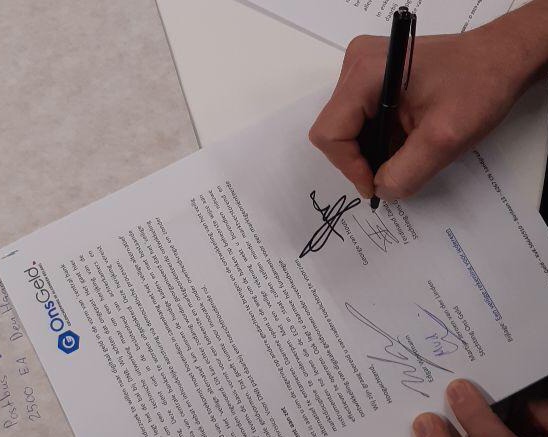 Parliament now has the support to push this through, as the WRR confirmed that providing a safe alternative to bank accounts will stabilise the financial-monetary system. The WRR asserts that the existence of a ‘safe alternative’ will force banks to finance themselves more responsibly, with more equity capital and long-term debt. It will also help to contain the issuance of money and debt by commercial banks, according to the WRR.

For now, our focus is on the Dutch stage. Most of our recent deliverables are also in Dutch. In the next period we’ll translate some of the material we’ve produced.

There is one addition to the English content on our website we’d like to mention, which concerns our proposal for personal safe accounts. It’s rather technical stuff, for those who like to dive deep into the matter. It will be expanded in the future on the basis of the questions we receive.

With about 50 attendees we’ve started the Ons Geld Academy. A place where our supporters can deepen their knowledge about the monetary-financial system, to enable them to evangelise the transition to a debt-free money system.

We at Positiva Pengar had a very busy beginning of summer..

We organized the conference The Future of Money, Central Bank Digital Currency and Beyond, in Stockholm June 15th. The focus was of course the E-krona initiative from the Swedish Riksbank which also participated together with celebrities like Steve Keen, Michael Kumhof and Miguel Ordonez former central bank deputy of Spain.  If you are interest in details here’s the E-krona report from October 2018 and here’s a speech given in London October 15th by Stefan Ingves chief deputy of the RIksbank.

The E-krona initiative that was started 2,5 years ago has now gone into a new and very interesting phase as the parliament on June 18th unanimously approved to ask the government to start an state inquiry. Its inquiry work is now under preparation and is expected to start beginning 2020. If you are interest in details here’s the E-krona report from on October 2018 and here’s a speech given in London October 15th by Stefan Ingves chief deputy of the RIksbank. 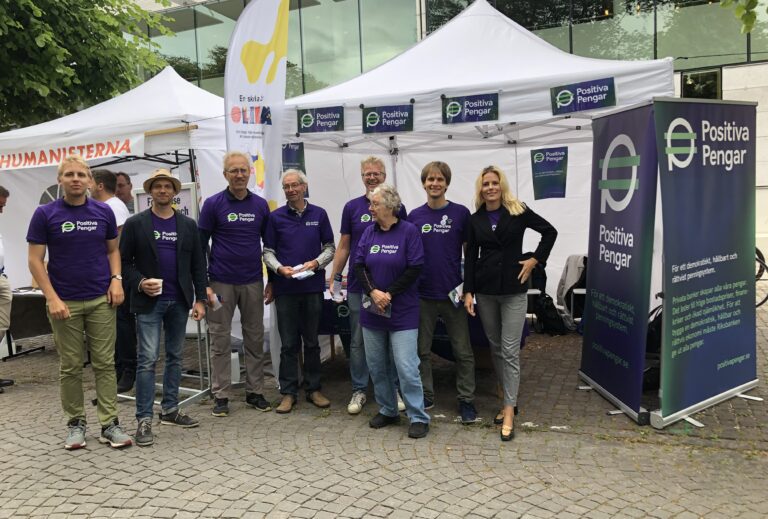 First week in July we participated in the one-week political event Almedalen in Visby, Gotland. We were nine persons promoting our monetary reform by giving a number of presentations and lectures and also giving speeches and discussing with people on the streets. This occation is a very good opportunity to market our case as a lot of the most influential people in Sweden are very available and you can meet them on the street.

After summer and continuing we are working hard to promote our reform and in particular try to influence all politicians and people that will be involved in the state investigation.

That’s all from Sweden

At the moment we are putting together a submission to go to our Governments Finance and Expenditure Committee in support of our petition.  It is due in on the 28th of this month so we have been busy writing content.

Following is a clip of the handover of our petition.  Feel free to share that. 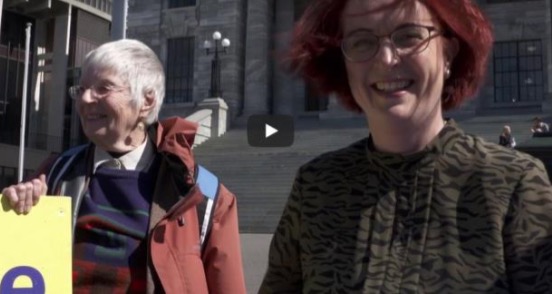 The petition was handed over to Dr Deborah Russell, the MP for New Lynn, on the 12th September on the steps of parliament.  Dr Russell congratulated us on gaining so many signatures and said that she was “happy to receive the petition”. We had spoken to Dr Russell at her electorate office in August and were heartened by both our reception and her grasp of the issues.

The Finance and Expenditure Committee has since asked for a submission to provide more detail on the petition and we have until the 23rd October to get the submission in. Watch this space

Our website has undergone a dramatic makeover, with its layout more suited to current sites. It is easier to view on multiple platforms, especially mobile phones and we also have a dedicated News Page. Our previous content is available via the archive tab. Our thanks to Martin Taylor for the great work he put in to make it happen.

• Sent out a press release on the hand-over of our petition.

• Posted a link to a video clip by Deutsche Welle – Germany’s international broadcaster on the money creation process. When our “Seven Sharp clip” was aired back in 2013, people from around the world were amazed that such a taboo had been taken up by the media. Now the conversation is becoming mainstream.

In the last month we’ve hosted three events alongside MPs, Lords and journalists: 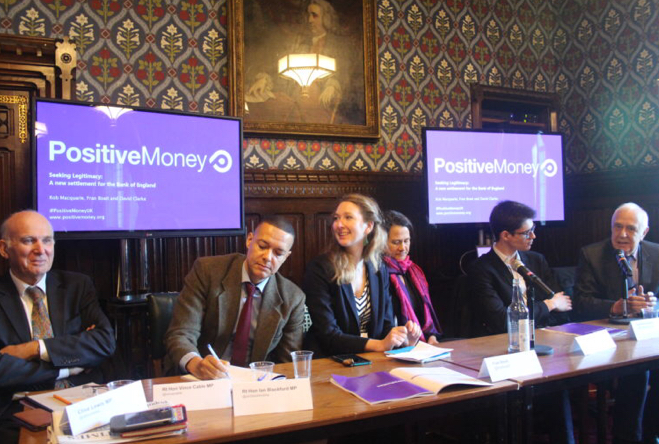 > Last week we launched a groundbreaking new report in parliament  “Seeking Legitimacy: a new settlement for the Bank of England.” A high-profile panel of MPs joined us for the launch event and the report got some great media coverage. Watch and share the one-minute videoexplaining the report here. (See full email we sent to our supporters about it below in case useful*)

> Labour Party Conference: “How will Labour pay for a green transition?”

> published a joint letter calling for much greater democractic scrutiny over the appointment of the new Bank of England governor. Together with the public opinion polling we commissioned, this helped us get some great coverage in Bloomberg, Financial News and The Times.

In August we released a new Introduction to Positive Money video called “It’s the Banks, stupid…”. Our supporters loved it and Gode Penge are making a Danish version!