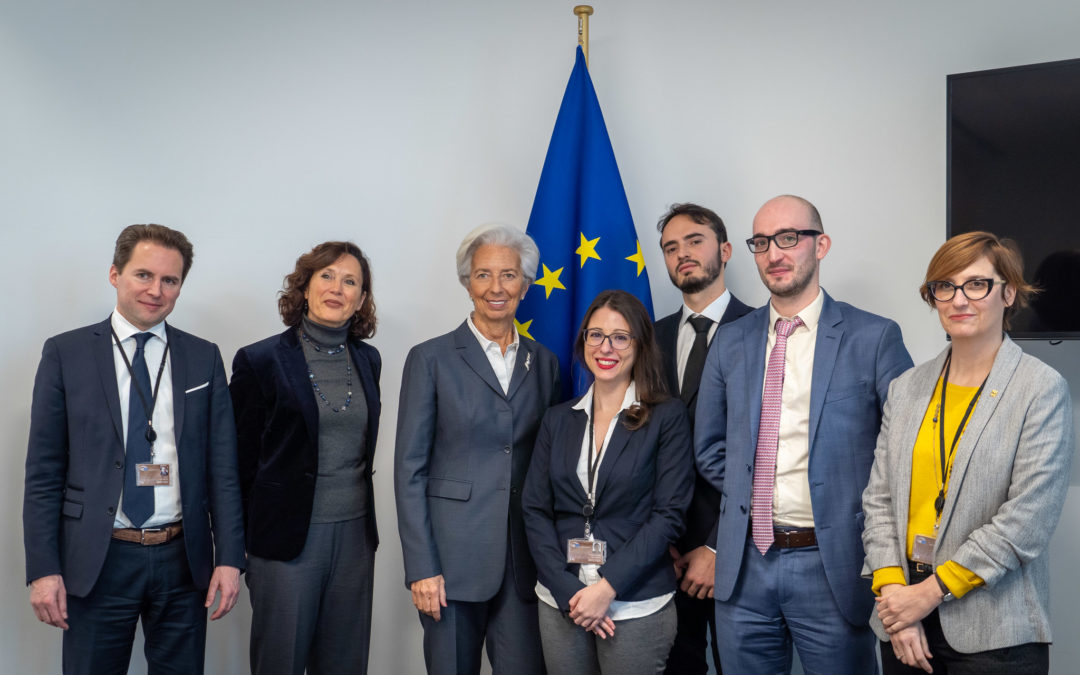 On Monday 2 December 2019, a group of NGOs including Positive Money Europe met with the new President of the European Central Bank Christine Lagarde to hand over a letter calling on the ECB to accelerate its efforts in the fight against climate change. Lagarde subsequently confirmed climate change will be in the agenda of the ECB’s review next year.

The meeting, which took place place in the European Parliament in Brussels, was attended by a delegation of five representatives of all 165 signatories of the open letter published last week in the media. Participants included Stanislas Jourdan and Alessia Del Vasto from Positive Money Europe, alongside representatives WWF, Finance Watch, Caritas France, and the Club of Rome.

The meeting was arranged after Positive Money Europe, alongside 160+ NGOs and academics, sent an open letter to the European Central Bank supporting Christine Lagarde’s ambition to make the ECB active in fighting climate change.

The letter was so successful that it made into several prominent european newspapers, including the Financial Times, Les Echos, Bloomberg, El Pais,La Repubblica, and Tagesspiegel.  The media coverage was so great, that it probably helped persuade the ECB to give our letter the attention it deserved, and thus our request to meet with the ECB president was approved.

Albeit brief, our meeting with Mrs Lagarde gave us the impression that new ECB President is sincere in her conviction that the ECB needs to enhance the fight against climate change. She was keen to listen to our views and asked several questions. As hinted in a recent letter to MEP Ernest Urtasun, Christine Lagarde confirmed her intent to include climate change considerations in the review of the ECB’s strategy – a long overdue process which is due to start next year.

This process should take at least one year, and may lead to significant changes to how the ECB design its monetary policy. The fact that climate changes orientations will be embedded in this exercise may imply the ECB will take longer to adopt concrete green measures, but it also means that this will be more than a window dressing exercise.

While welcoming this important step, Stanislas Jourdan insisted that the review process must be open to civil society contributions, to avoid the “risk of cognitive biases.” He stressed that opening up the process to external contributions would not only ensure that a plurality of views will be taken into account, but it would also strengthen the legitimacy of its outcome. Less than one hour later after our meeting, Christine Lagarde was speaking to the European Parliament’s ECON Committee for her first hearing monetary dialogue hearing in her new capacity as ECB President. During the lively exchanges with MEPs, Lagarde showed that some elements of our discussion were taken into account.

For example, Christine Lagarde emphasized that the “strategy review will be guided by two principles: thorough analysis and an open mind.” and further on, she went beyond her official statement on the ECB website by adding that “Civil society representatives will also need to have a conduit” in the framing of the strategic review.

“I just spent half an hour with those representing the signatories of the letter and we agreed to pursue the dialogue because I need their input” she explained later.

Watch video of Christine Lagarde in the European Parliament “We must take climate change into account”.

How will the ECB fight against climate change?

A higher number of MEPs (Manon Aubry and Stéphanie Yon Courtin, Sven Giegold, Paul Tang and Johan Overtvelt) asked the ECB President to elaborate on how she thinks the ECB could play a role in fighting climate change. In her responses, Lagarde responded to many of the points made in our open letter.

First, Lagarde proposes to integrate climate change into the macroeconomic models used by the ECB in its macroeconomic forecasts – a sensible idea but which does not directly affects the design of monetary policy.

Secondly, Lagarde pointed out that the climate must be integrated into banking and financial supervision, to ensure that market participants take climate risks into account in their risk management and the information provided to investors. Led by the work of the NGFS, this stream of work has become quite consensual at this stage already.

Thirdly, non-monetary investments funds by the ECB should favour “green” financial instruments. Again, this is rather symbolic measure since it only involves the ECB’s own funds and not monetary policy, but may pave the way and build in-house knowledge on how to scale such approach.

Fourth, she was adamant to push credit ratings to do a better job in measuring the climate impact and climate related risks of the companies they rate: “I would hope that the three big well-known rating agencies move in that direction, and if they ask me my views, I will tell them just as I’m telling you now.”

Last but not least, Lagarde acknowledged that the ECB’s Quantitative Easing programme was problematic from an environmental viewpoint (and in particular, she mentioned our joint study on the climate impact of CSPP). While she did not announce any specific change at this stage, she made it clear that market neutrality should not be not taboo during the review:

“[Market neutrality] is a principle that has applied. Should it be revisited? Should we look at it? How do we do that? I think this will be exactly part of the strategic review that we will also need to conduct.”

Overall, our meeting and the hearing have both confirmed that a big window of opportunity has opened up with the appointment of Christine Lagarde at the ECB’s helm. And the meeting in itself is a great achievement for Positive Money Europe and its allies, as it demonstrates how much credibility and trust we have gained throughout the past years of work.

However, this is only the very beginning of a long and rocky road, as everything Lagarde wants to do will need to be approved in the ECB’s Governing Council which also comprises national central bank governors of the Eurozone. We are not claiming victory just yet.

To a great extent, Lagarde’s success in delivering on the many hopes that she has spurred will depend on the design of the process of the review. The framing and timing of the review shall be discussed for the first time on December 11-12 in Frankfurt by the Governing Council. Positive Money Europe’s next step will be to ensure that the civil society and the Parliament are both consulted not only during the process itself, but also in the preparation and design phase.

More pictures from our meeting with Christine Lagarde are available here.