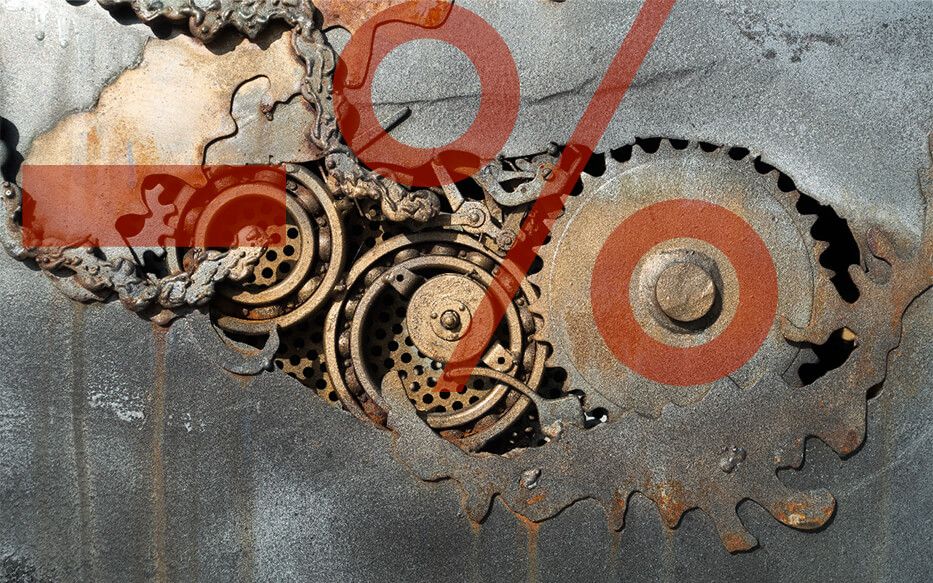 Why are deposit rates persistently low? In the Netherlands (and other developed countries) interest rates have been falling for thirty years. They are now likely to become negative for the ordinary saver. What is the cause and how can it be solved?

Economists give various explanations for the ever-falling interest rates. Two groups can be distinguished. The first group relates the decline to demographic development and in particular, to an aging population and its saving habits. The other group blames the ECB, which would keep interest rates artificially low.

Market regulation
In this article I argue that the persistently low interest rates are neither explained by the saving habits of an aging population, nor by the policy of the ECB. The cause lies in the structure of the monetary-financial system of which the central bank is the cornerstone. This structure lacks sound market processes for deposit rates. Deposits are created by the banks themselves and are automatically available to them as funding. Depositors have no real negotiating power vis-a-vis the banks. To realize proper market mechanisms for deposit rates the market regime needs adjustment. That is the responsibility of the legislator, not of the central bank.

Safe alternative
The adjustment starts by giving depositors a safe alternative to the bank account. That gives them real negotiating power vis-a-vis the banks. Presence of this safe alternative also makes it possible to gradually phase out deposit guarantees and other state aid to banks, and to raise risk awareness among depositors concerning lending money to a bank. These are the ingredients for applying appropriate market processes to deposit rates.

Savers have no choice
The problem that underlies negative interest is neither the age of the population nor its saving habits. The reason is that in the current market structure, savers lack a proper way of saving money without making it available as funding to a bank. There is no safe depository for cashless money. Those who do not want to lend their savings to a bank must withdraw them in cash and keep them in a safe. The inconvenience, the risk and the costs thereof leave room for negative interest on savings. In the absence of an alternative, savers have little room for escaping the banks’ market power. They will ultimately accept negative interest on their deposits, whether they like it or not.

Safe alternative
Excessive market power of the banks can be curbed effectively by providing a safe alternative to the bank account. Both Parliament of The Netherlands and the Scientific Council for Government Policy expressed support for that. In the presence of a safe alternative, negative interest rates would never occur. Those wanting to keep their money safe would transfer it to their ‘personal safe account’, which is interest-free because the money in the safe account is not used by anyone.[1] The personal safe account was first proposed by Ons Geld and concerns a full reserve account held at a public depository. It is accessed via a payment service provider (PSP) chosen by the holder of the safe account. If the holder switches to another PSP his personal safe account remains unchanged with him. His new PSP provides access via its payment environment. It is inactive until the account holder decides to use it. With a personal safe account at hand, savers would only make funding available to the banks if that seemed advantageous to them. For example, because they are properly rewarded for the risk they take by lending to those banks.

No market processes
In the present system, the funding of banks with deposits lacks appropriate market processes. Supply and demand for deposits are not matched on a free market, mediated by the price (interest). The supply of deposits is generated by the banks themselves as a result of credit  extension.[2] These deposits are automatically available to the banks as funding. The saver has little choice. He surely can choose to which bank he makes his savings available. That he makes his savings available to a bank, however, follows from the institutional order.

In turn, banks are not free to determine their intake of deposits according to their need for funding. That is peculiar. No other company is forced to accept funding from its clients regardless of its need for it. Strangely enough, that is the situation banks must deal with.

Financial self-gratification
As long as supply of deposits is insufficient to satisfy the banks’ need for funding, depositors have some negotiating power. Shortage of supply forces banks to compete with each other to attract savings from the public. Persistently falling interest rates, however, indicate that the banks have gradually satisfied their need for funding. They now have created so many deposits that they don’t have to compete to attract their share of it. Instead they can determine the price (interest rate) unilaterally. That is the real reason why interest rates are persistently low.

Zero lower bound
Until recently it was widely believed that interest rates could not fall below zero. That turned out to be untrue though, as the alternative, holding considerable amounts of cash is inconvenient and risky. This encouraged the financial industry to explore how deep negative interest rates can become, before cash withdrawals start eroding their funding. Although their lower bound is below zero, the availability of cash still offers depositors some protection against greedy banks. If banks extract too much interest depositor can chose to accept the risk and inconvenience of holding cash instead. The financial industry is working hard to deprive the public of this protective quality of cash, though.[3]This is illustrated by a recent publication of the IMF presenting strategies to allow for deep negative interest rates by side-lining cash.[4]

Market functioning
If savers have an appropriate alternative, they will not lend any money against negative interest rates, and perhaps not against the low deposit rates of recent years. Enabled to safely and conveniently withhold their savings, depositors are positioned more equally vis-à-vis the banks. This empowers them to demand appropriate interest payments considering the risk they take whenever they lend savings to a bank. Thus, market processes are introduced compelling banks to reasonably remunerate the savings they borrow.

These market processes will not be perfect at once, though. Banks remain able to create their own funding and governments continue to pursue policies (like deposit guarantees) that undermine risk awareness among the public. These two interrelated factors will still be causing persistently low deposit rates. Implementing a safe alternative however, is the first step to gradually remove those two factors. Availability of the safe alternative allows governments to phase out deposit guarantees and other state support for banks. It also inhibits the ability of banks to create their own funding. Growing use of the alternative will expose banks increasingly to the risk that the money they create will not be available to them as funding. This forces them to reduce their dependence on deposits and finance themselves more responsibly, with equity capital and long-term debt.[5]

The Central Bank
The cure to persistently low interest rates lies in exposing banks to market forces. This, however, brings the ECB in a precarious situation. Central Banks consider it their task to ensure that confidence in the banks is never lost. That makes them reluctant towards measures that subject banks to market discipline. After all, due market processes imply that depositors wonder what risk they are taking by lending money to a bank. Under market conditions confidence in the banks is constantly being questioned. That is exactly what central banks try to prevent.

The persistently low interest rates cannot be blamed on the ECB. These rates emanate from a system of which central banks are the cornerstone but not the architects. Responsibility for that system lies with the lawmaker. The ECB can be blamed however, for not trying to reverse the declining rates and for actively trying to keep them low. Its scope for action is very limited, though. The ECB cannot put the banks under too much pressure.[6]

Ultimately, general trust in the banks is more important to the ECB than any interest rate. The ECB will unleash market forces on banks only if it has the instruments to do this in a controlled way. The safe alternative to the bank account is the key to making these instruments available.

Conclusion
The persistently low interest rates are not due to the age and behaviour of savers. Nor do they emanate from the policy of the central bank. They are a consequence of the structure of the monetary system. In that system, banks themselves create the deposits with which they finance themselves and savers have little choice but to make their money available to the banks.
By giving savers an appropriate alternative to the bank account, deposit rates can be subjected to market forces. Only under undisturbed market conditions does it make sense to look atmarket-oriented explanations, such as demographics, for the low interest rates. In the absence of proper market processes, the explanation for the near zero interest rates lies in the organization of the monetary system itself. This organization provides that all the money that banks create is in principle also available to them, enabling them to determine deposit rates unilaterally. The behaviour of savers is only relevant in so far as they keep their savings in cash or turn their back on a certain bank en masse.

If politicians want to curb the negative interest rates, they will have to take action themselves by introducing market processes in a responsible way.

[2]Strangely enough, most economists think it’s the other way around. Their textbooks say that investments (I) result from savings (S) after intermediation by the banks: S -> I. In reality it is exactly the opposite. The savings (S) are the result of bank credit extension (BC) for investment (I) and speculation etc: BC -> I -> S. Misrepresentation of reality explains why economists generally fail to uncover the cause of persistently falling interest rates.

[3]See the work of Norbert Häringwho published extensively on this matter, especially his book “Schönes neues Geld” (2018), in which Häring describes how a powerful international lobby campaigns for the abolition of cash under the disguise of ‘financial inclusion’.

[5]This is one of the reasons why the Scientific Council for Government Policy in its report ‘Money and debt‘ (2019) recommends introducing a safe alternative to the bank account.

[6]If the ECB wanted to stimulate market forces, it would raise its interest rates sharply, making banks more dependent on investors and depositors, thereby killing weak banks. It does not do that though. It follows the trend instead of reversing it. Putting banks at risk is not part of any central banks’ DNA.